May 11, 2018
I take time out of my regularly scheduled crochet posts to make a special post about a recipe that I tried this morning and absolutely love. Recently, I have been diagnosed with gestational diabetes which has curbed one of the biggest loves of my life. Cutting down on carbs is so hard for me.

But at 4am today, I was shown a recipe that I absolutely had to try and being the way I am, I tweaked it slightly.

But the tweaks I'm making are here. And not everything has a photo since I was by myself at 5am and time is of the essence when you're working in the final steps.

I started the recipe by separating my eggs. Egg white went straight into the mixing bowl and egg yolks went into a separate small bowl for later. I didn't measure out the peanut butter at this stage as I am lazy and want to save on washing. 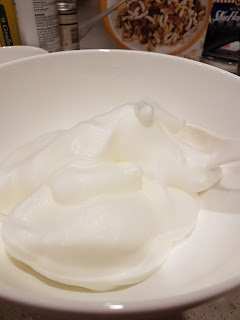 So first thing's first I whipped up my egg whites until peaks formed. Admittedly I did also add a tablespoon of sugar here but this is up to yourself. Then I tipped them out gently into another bowl to use later.

Then using the mixing bowl I had used for the egg whites, I measured out the peanut butter, added a small pinch of salt and the egg yolks. 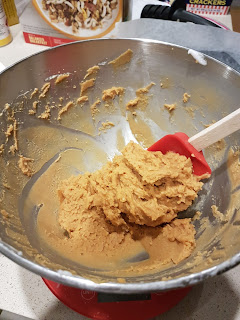 The peanut butter was whipped up for about 6 minutes. At this stage, if you want the mix to be even smoother, you can also add a bit of melted butter or oil. But I didn't do that at this stage and left it as is. The next part is the tricky party and it helps if you have any experience making chiffon cake/angelfood cake/macarons and red velvet cakes.

Once everything is mostly combined (doesn't have to be completely perfect at this stage), mix the vinegar and bicarb together and it will fizz nicely. Quickly mix this into the egg white/peanut butter mix.

This will complete the "almost combined) into a completed mix. I baked mine for about 25 minutes but I also don't have a small loaf pan. I'm a baker so all my loaf bans make giant full sized loaves and I'm guessing the original recipe used a small, bake at home, loaf pan. The loaf about 1.5 to doubled in size during baking. Aaaand comes out more like cake than bread because of the tweaks I made. 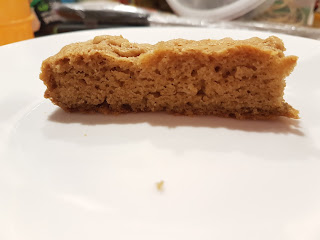