February 15, 2014
So....onto my first challenge for the cooks side of things this year!

The February Daring Cooks' Challenge was hosted by Audax of Audax Artifex. The challenge brought us to Greece with a delicious, flaky spanakopita - a spinach pie in a phyllo pastry shell.

So obviously the first thing I set about doing was starting up the pastry.

1. Combine the flour and the salt in a bowl. Mix the water and the oil together and gradually add until it form a nice and firm but not sticky dough. 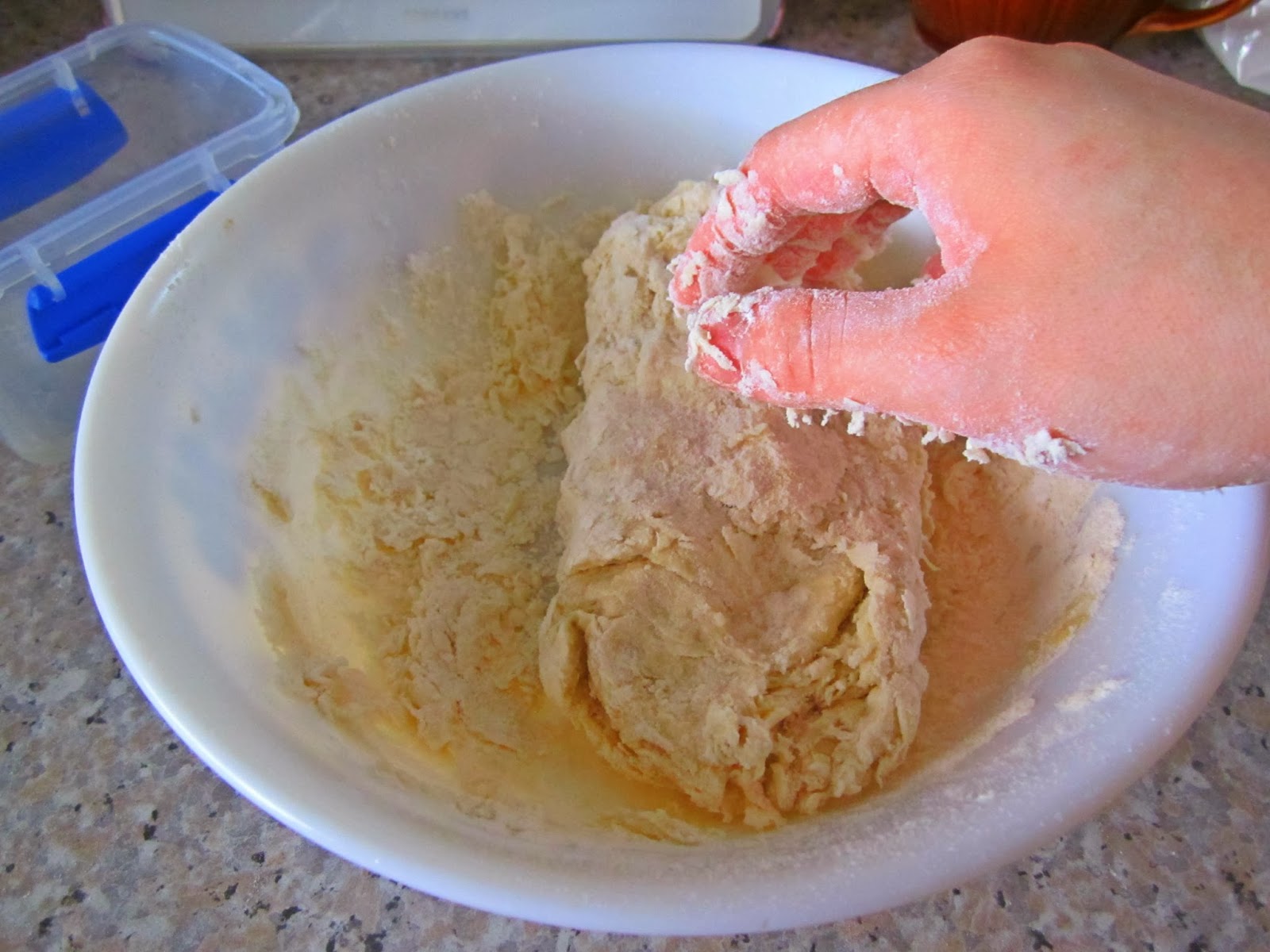 2. Work the dough until it becomes nice and elastic. I then glad wrapped it and put it in the fridge for an hour while I made the filling. 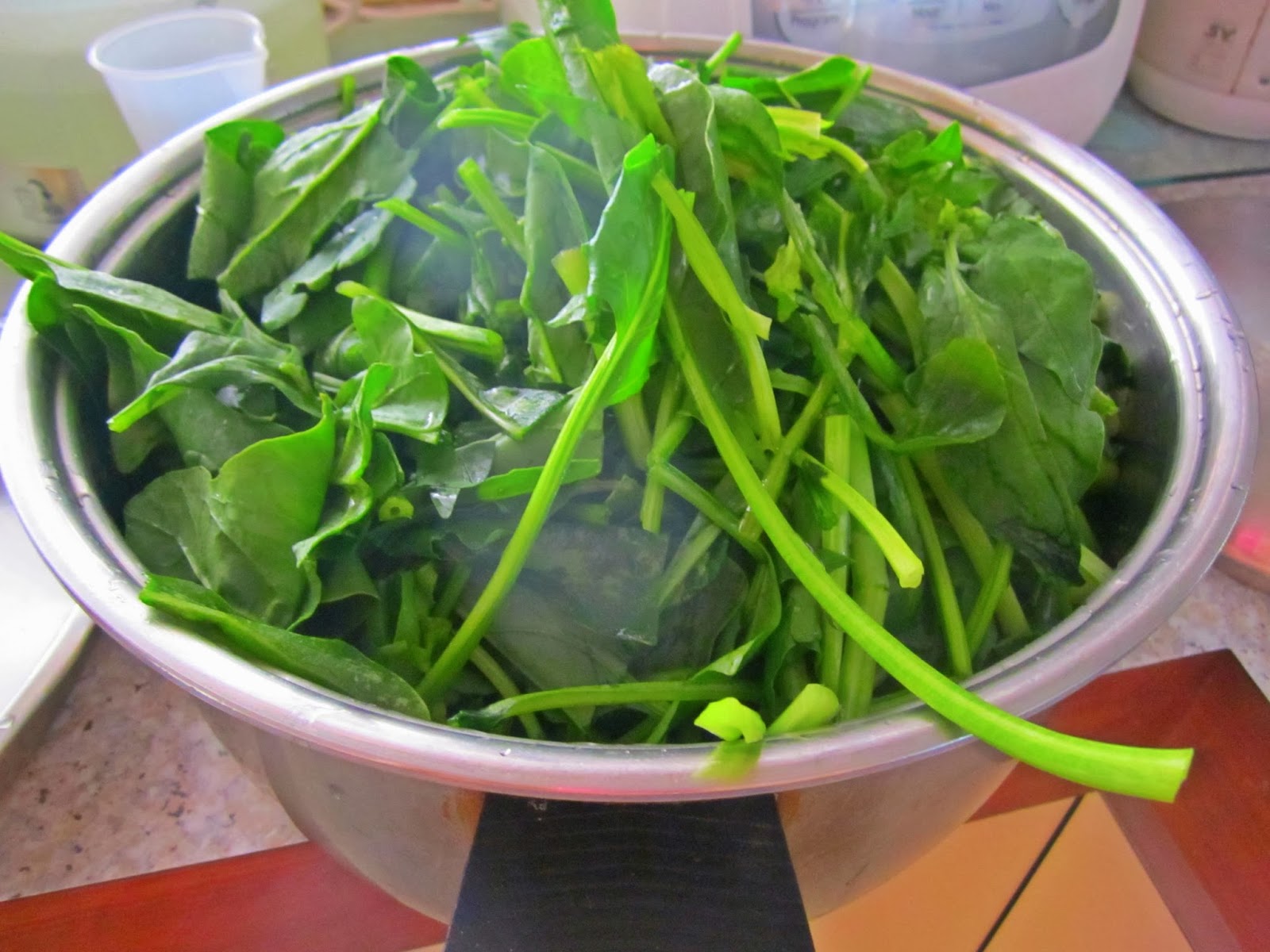 3. I went to the chinese store and bought some english spinach. You can get about 300grams for about $1 so that was a good score for me.  I put the spinach into a huge pot with about a cup of water. Then put a lid on and let it cook and steam until ready. 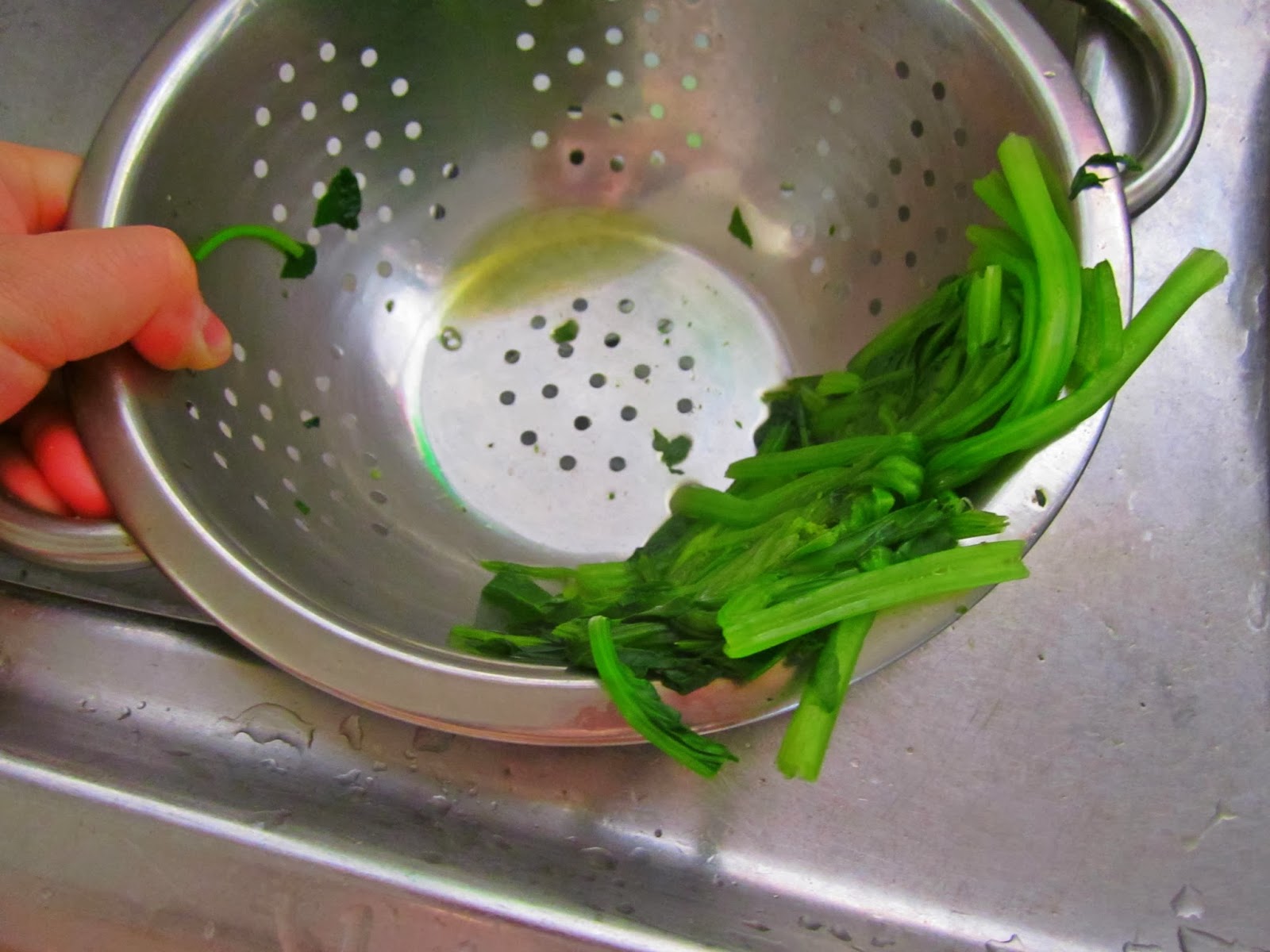 4. After it's been cooked down, I drained the spinach really well and tried my hardest to get as much liquid out as possible. 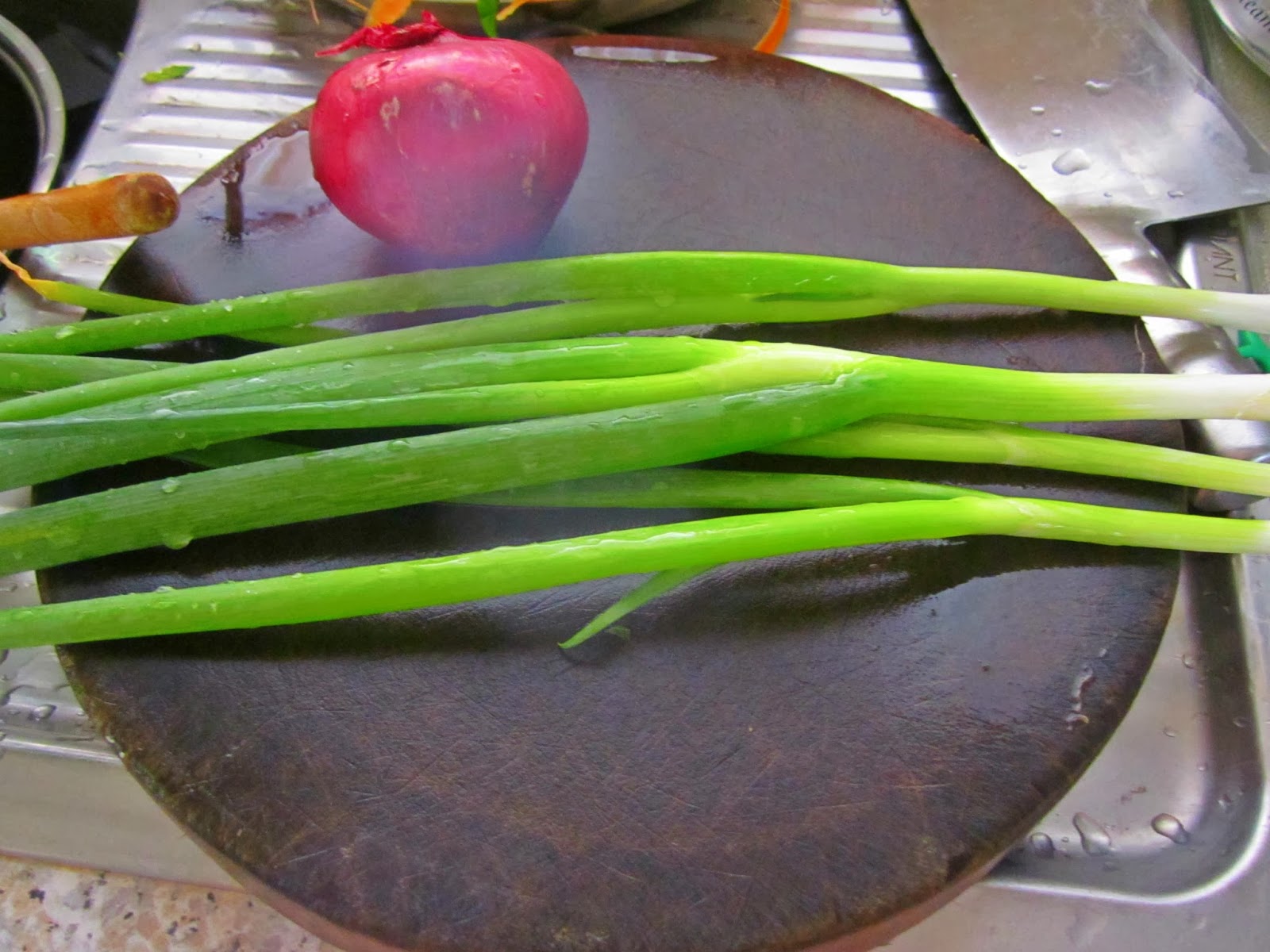 5. I then chopped up the spring onion, onion and garlic and added it to the bowl. If I had a chance to redo this recipe, I would cook down these ingredients before adding it to the bowl because I enjoy my onion slightly more cooked than it got in the oven. And would make it a slightly sweeter recipe than the sharp slightly raw notes I got once in a while. 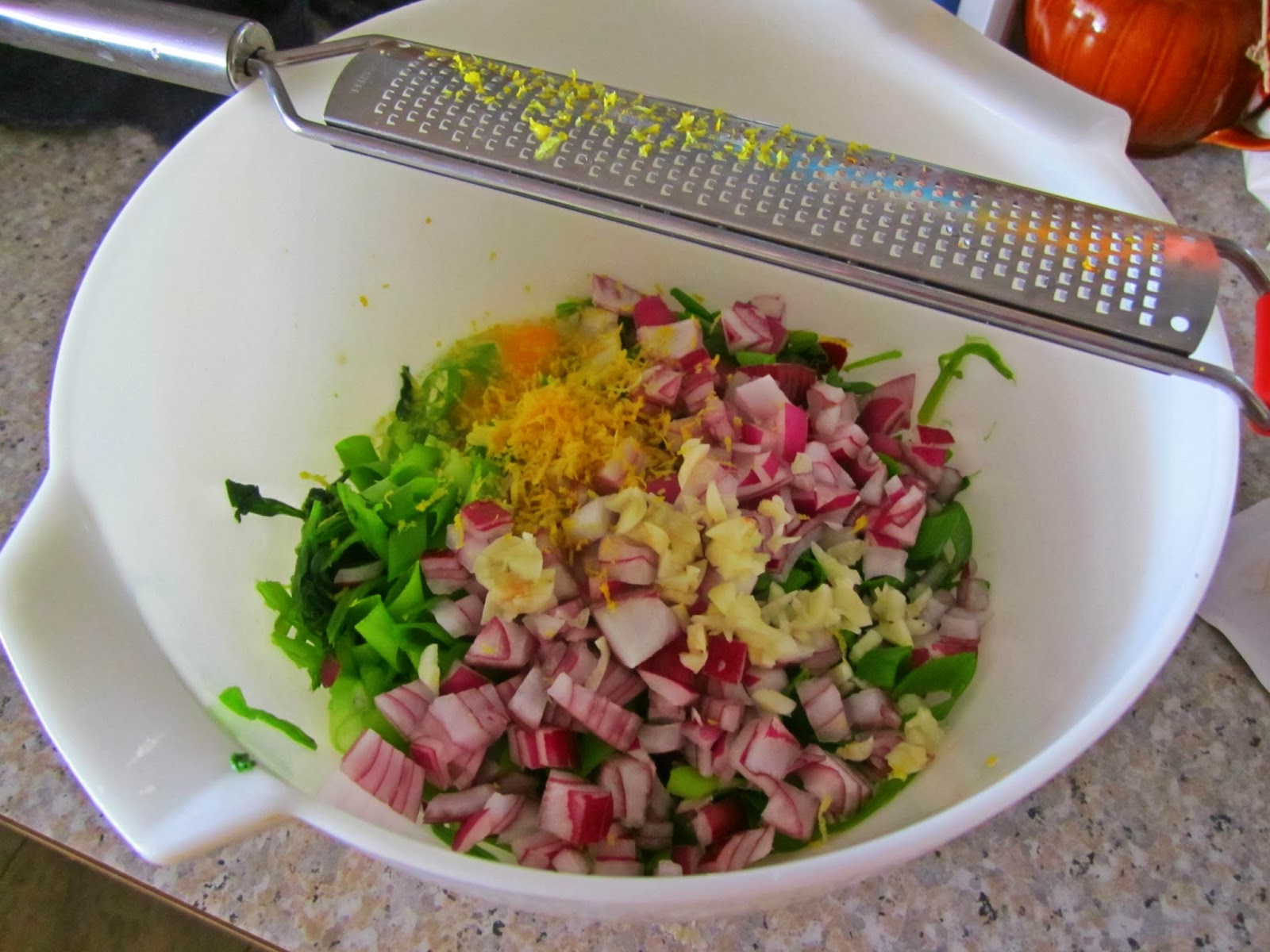 6. So in went all the ingredients, lemon zest, salt and pepper. 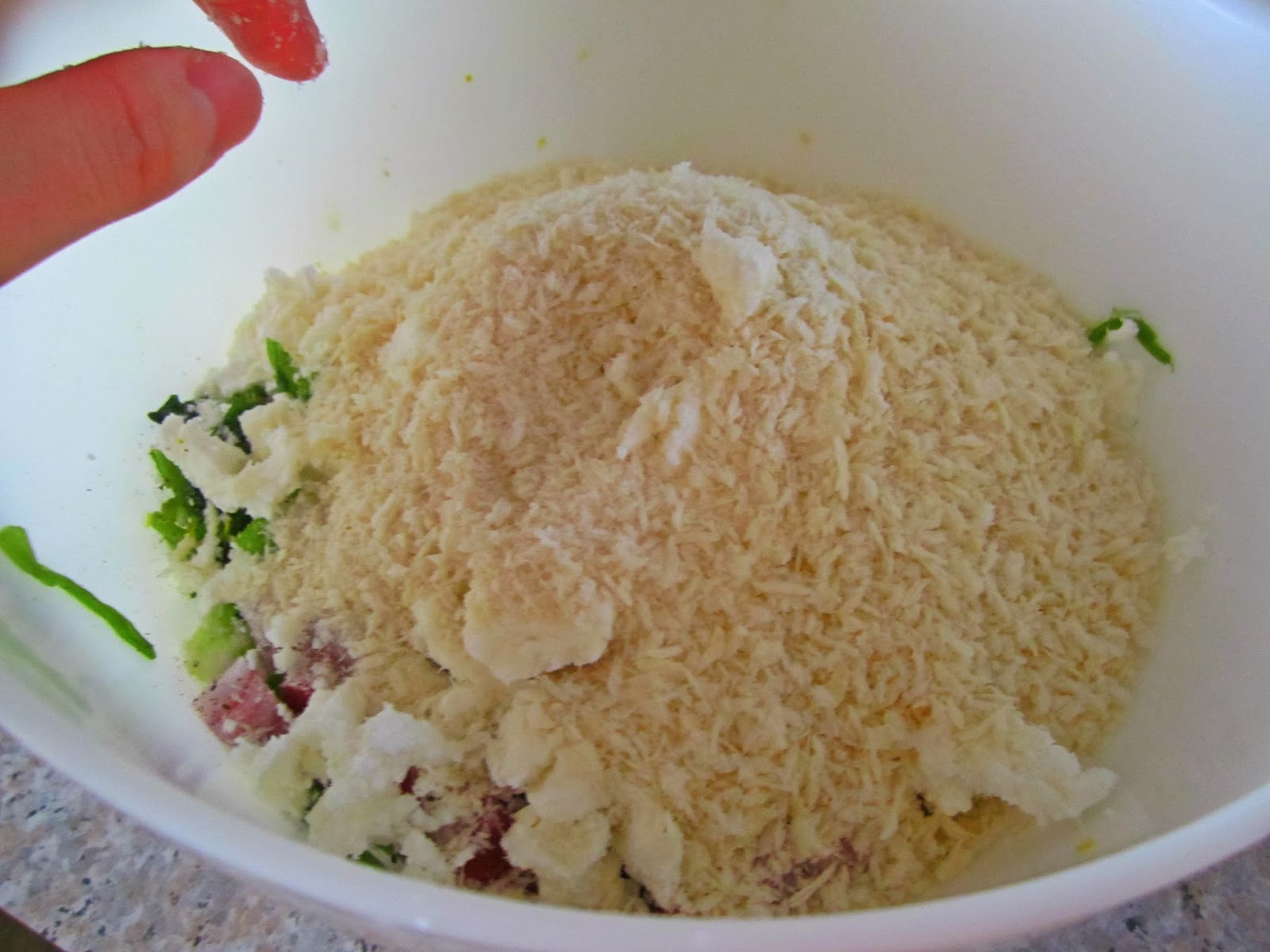 7. To help with the moisture I couldn't get out, I added the breadcrumbs and make sure to season well with salt and pepper. Then smoosh it all together with your hands (this was the fun part). 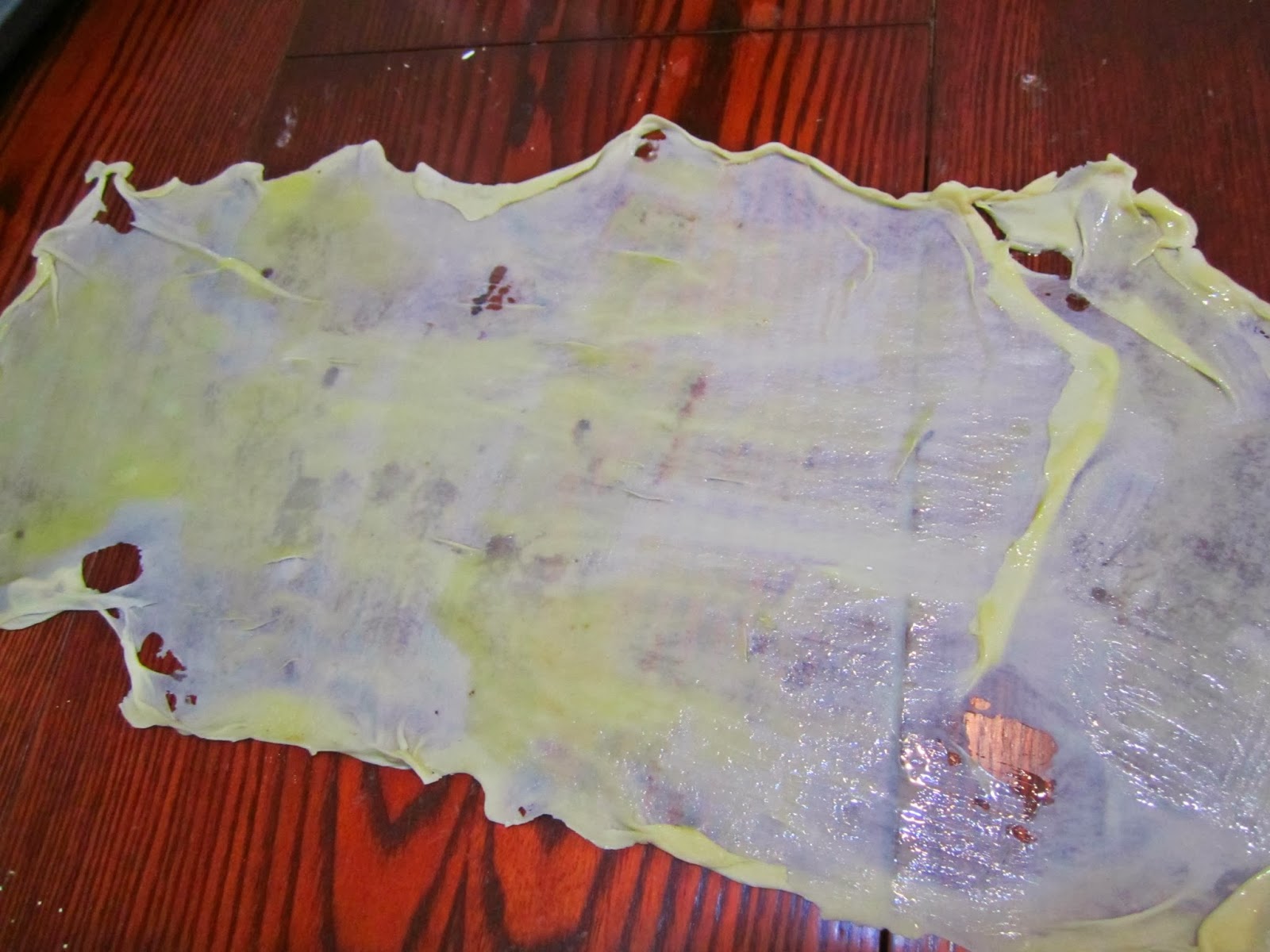 8. With this step, the dough has been nice and rested. I got my pasta machine out and start rolling. So the trick is to get it as thin as possible. If there are a few holes, don't worry, they'll patch up with the next few layers. I divided my dough into ten portions. Starting with the widest setting, I rolled the dough out and gradually decreased the setting until as thin as you can make it. (On my pasta machine, I only  went about the halfway point). After that, you stretch by hand.

The reason I divided it into ten balls was because that was easier to work with compared to five. I used two of the sheets laid side by side to create one big sheet so the spanakopita itself only had 5 layers in the end.

Between each layer, brush with the quantity of melted butter as is in the pastry ingredients. 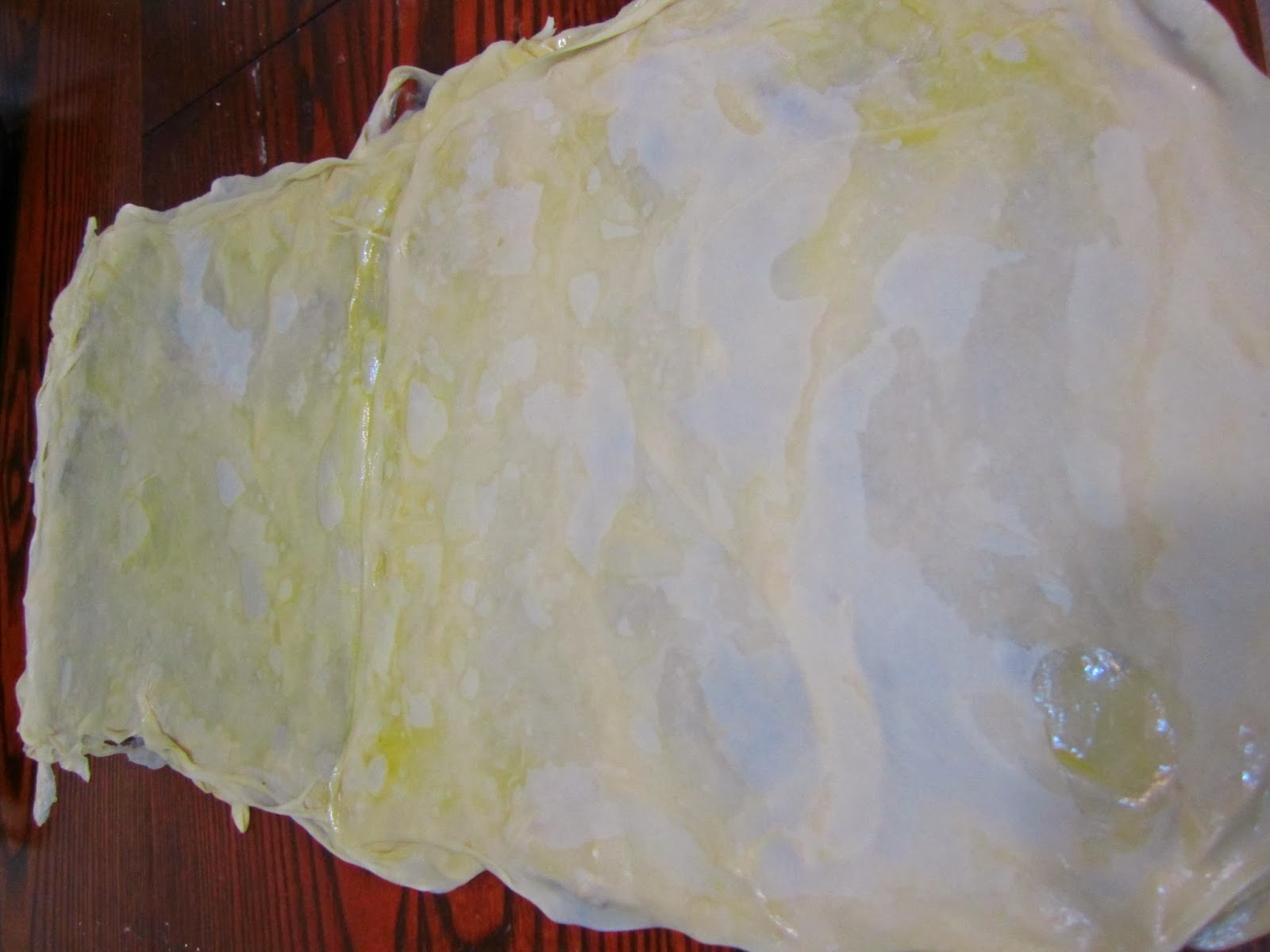 9. When you get to the final layer you'll see something like this. Nice giant sheet of five layers of pastry. Each sheet with butter in between. And all the holes pretty much disappeared. :) 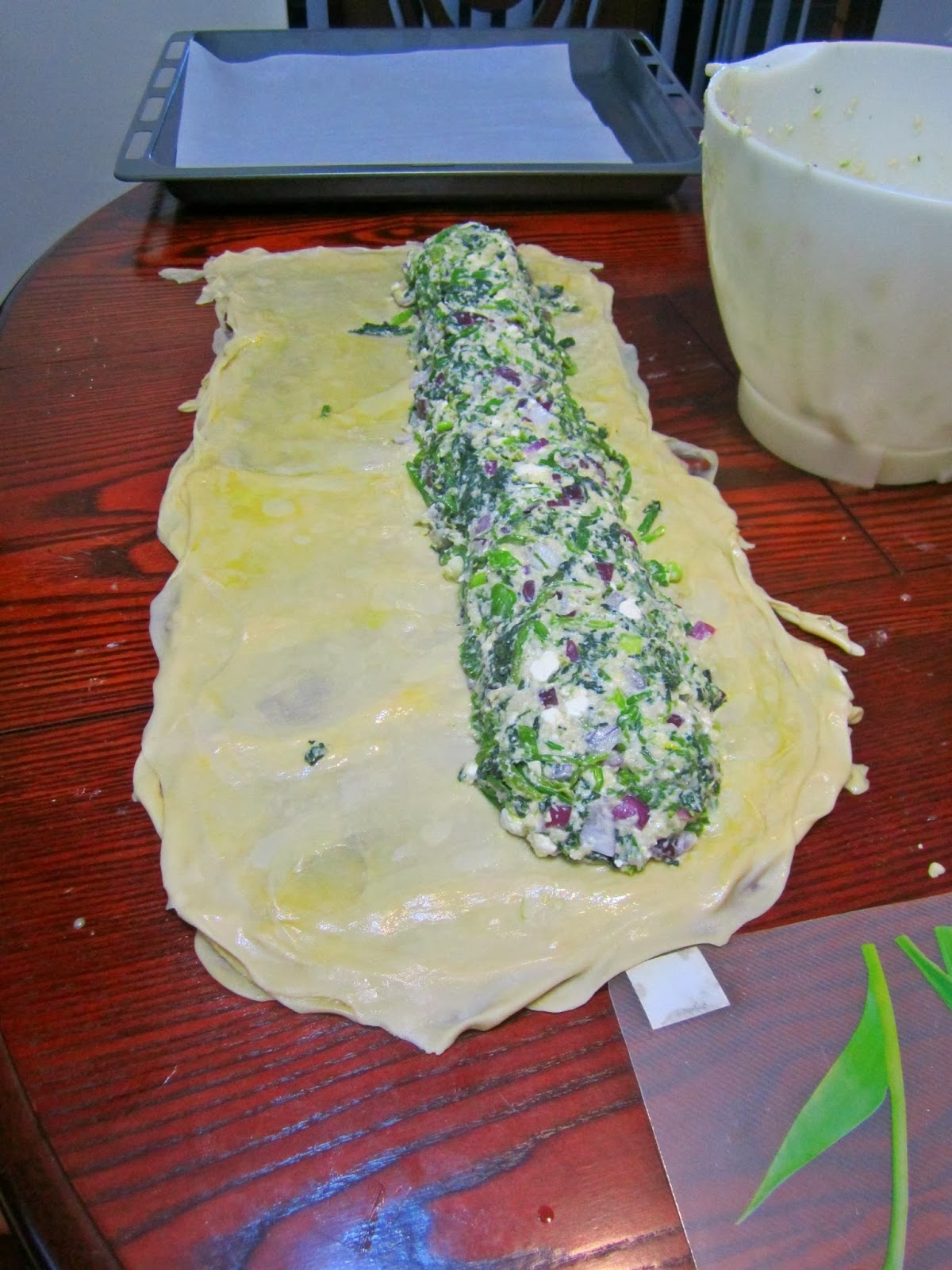 10. I lay the ingredients all along the top. Then rolled down the top. In future, I would lay down baking paper before actually starting the layering of the phyllo. I managed to get it off the table but it would have been SO much easier had I been smart and lay down the baking paper beforehand. After rolling it into a log, I coiled it up and put it on my baking tray. 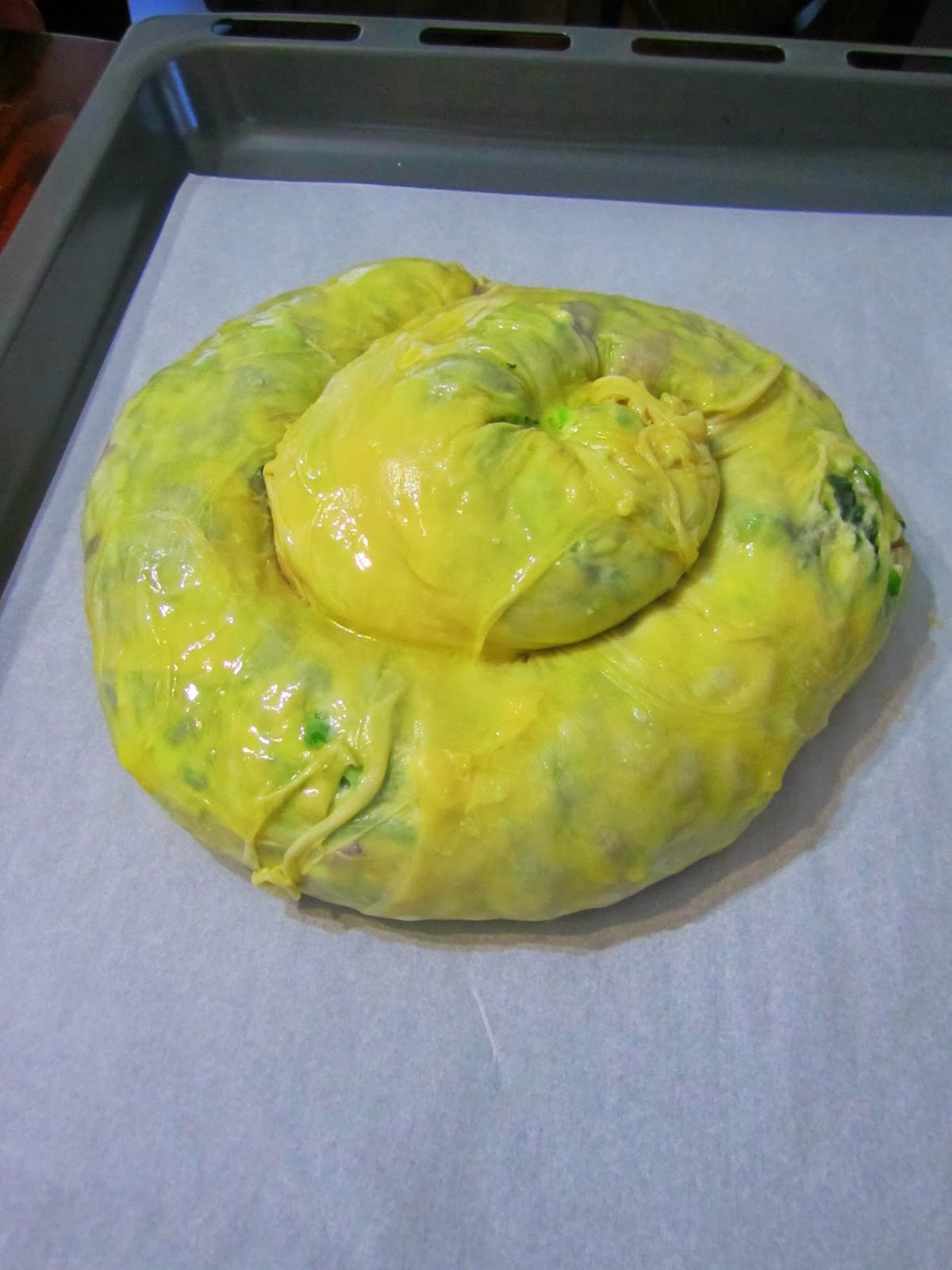 11. First, brushed this pastry all over with the remaining butter and a beaten up egg. I baked this guy on 180C for about 40 minutes. 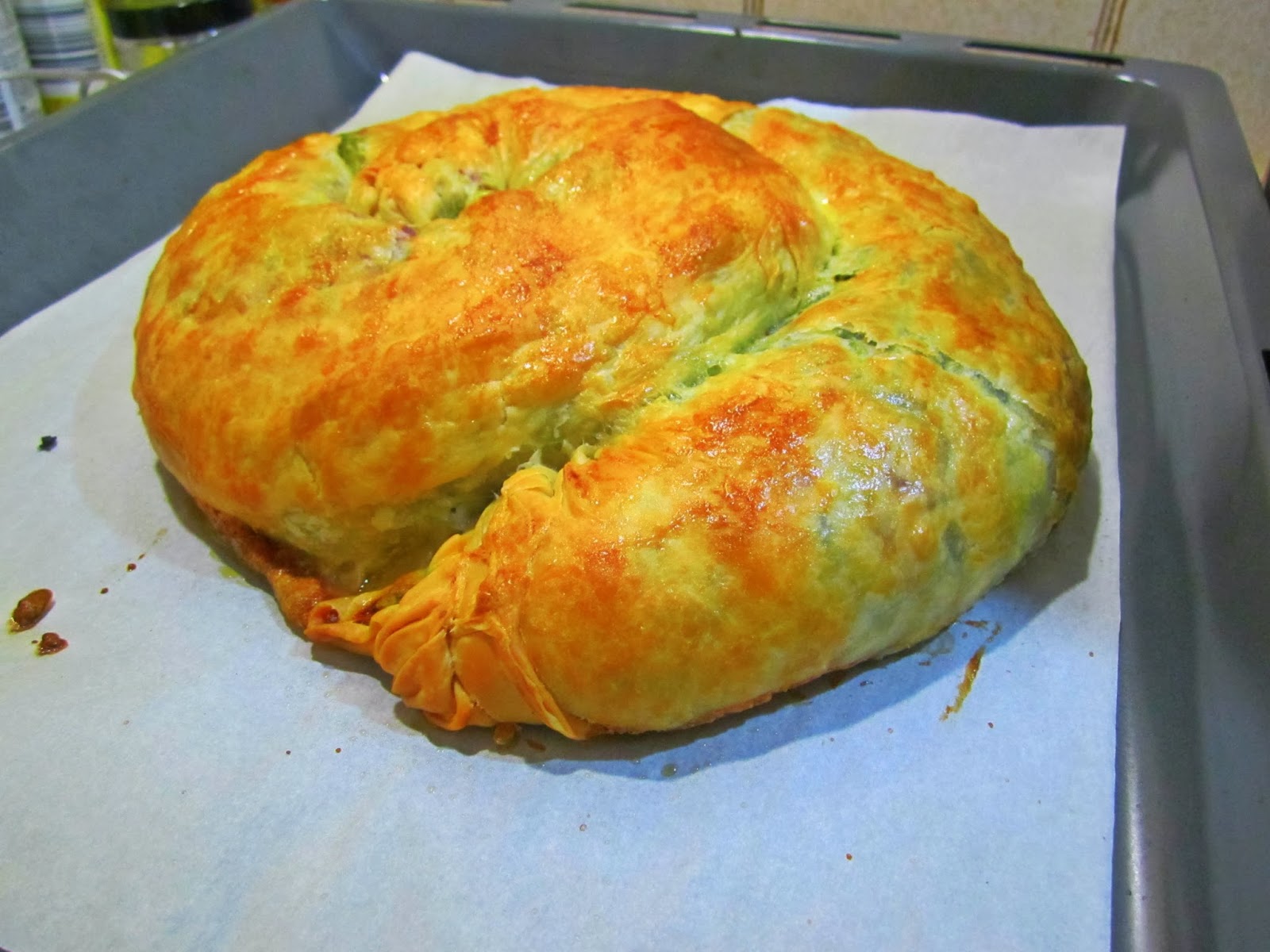 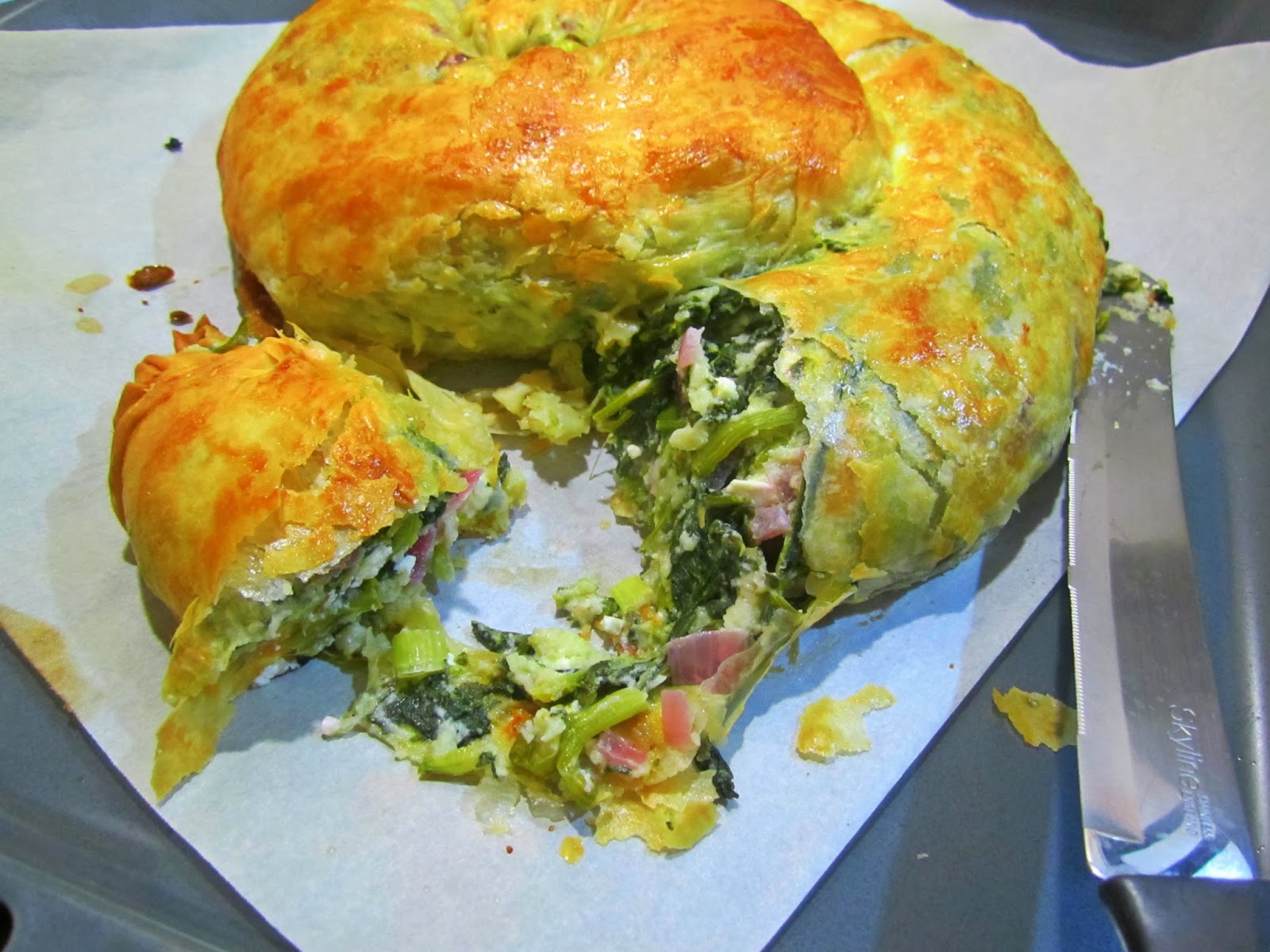 And that is my spanakopita~ It was so delicious..... ...and so big. The two of us ate it for days upon days.