February 27, 2014
Beauty surrounded the Daring Bakers this month as our host, Sawsan, of chef in disguise, challenged us to make beautiful, filled breads. Who knew breads could look as great as they taste?

For the challenge, I have made a sweet bread! Even though I am tempted to re-make this recipe at some point with some ham, pesto, sundried tomato and roast capsicum. 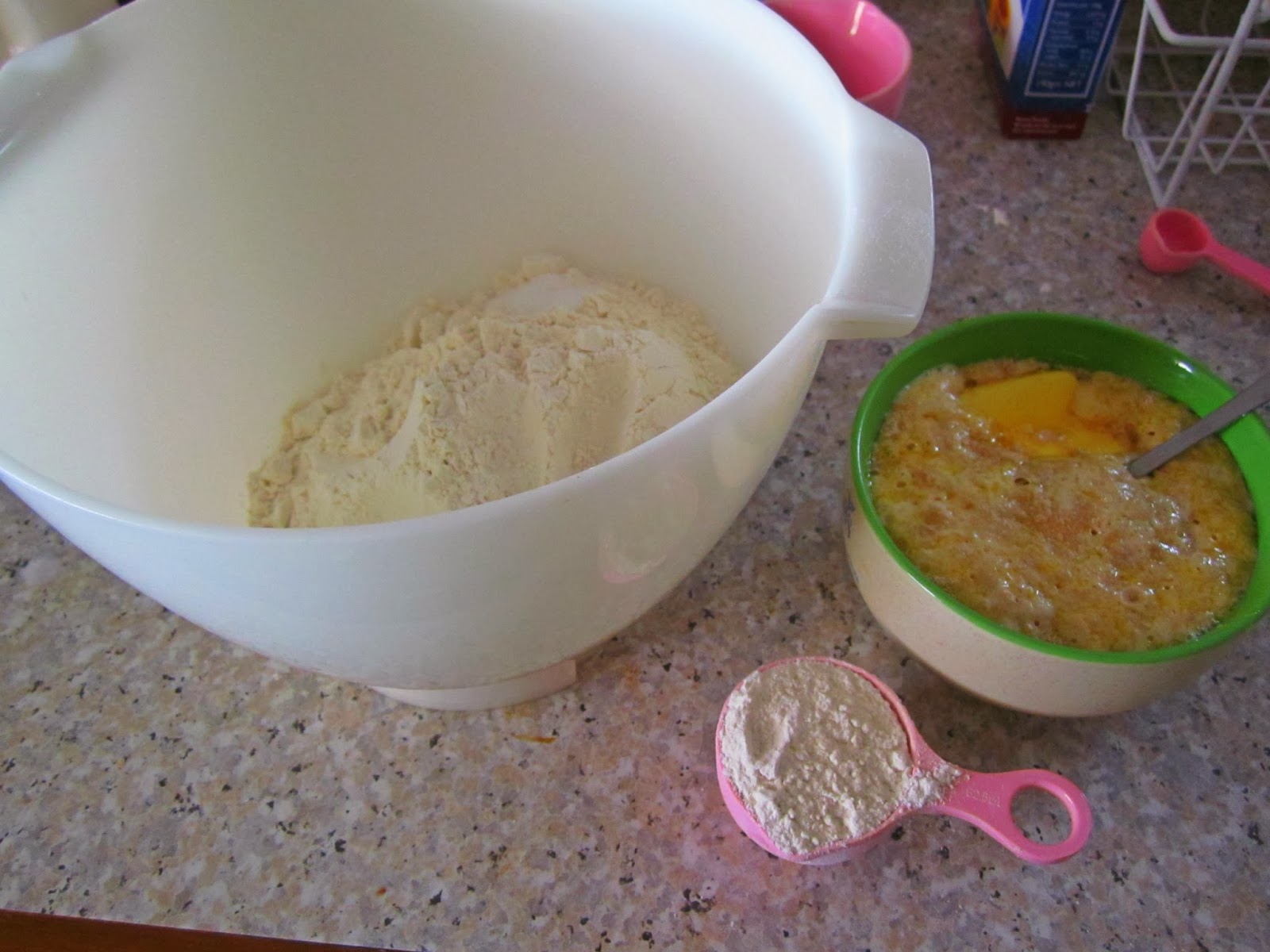 I combined the egg with the milk, water, sugar, butter and yeast then I set it aside to froth for about 10 minutes. I added 3 cups of flour into the bowl and then I kneaded everything together. In the end I didn't need the extra 1/4 cup of flour so I put it back into the flour bag. 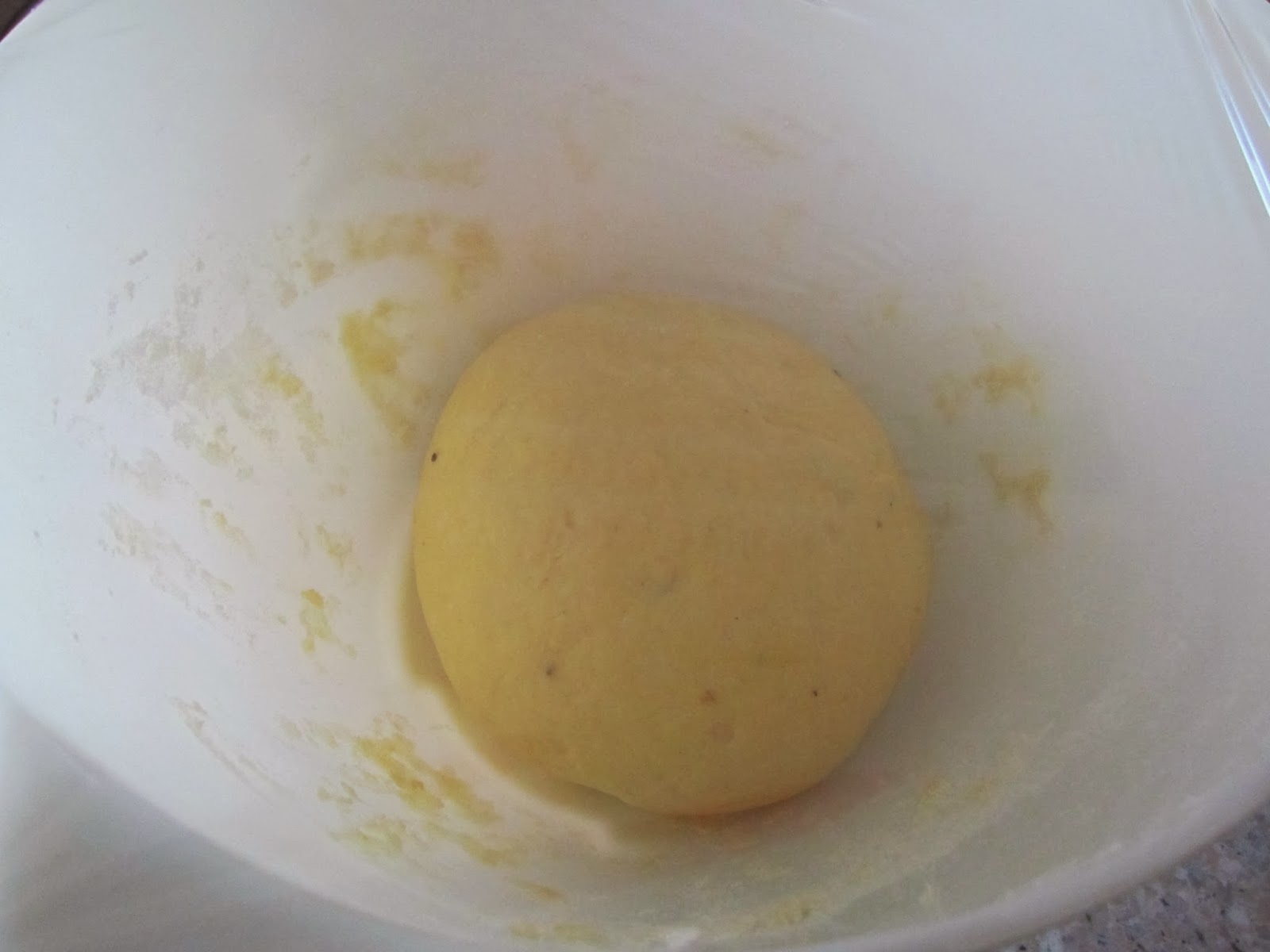 This dough was a pleasure to knead by hand and it was really soft and fun to work with. In all it took about ten minutes of kneading until it became a nice elastic ball. I cling wrapped the bowl tightly and set it aside in a warm place for the dough to rise. 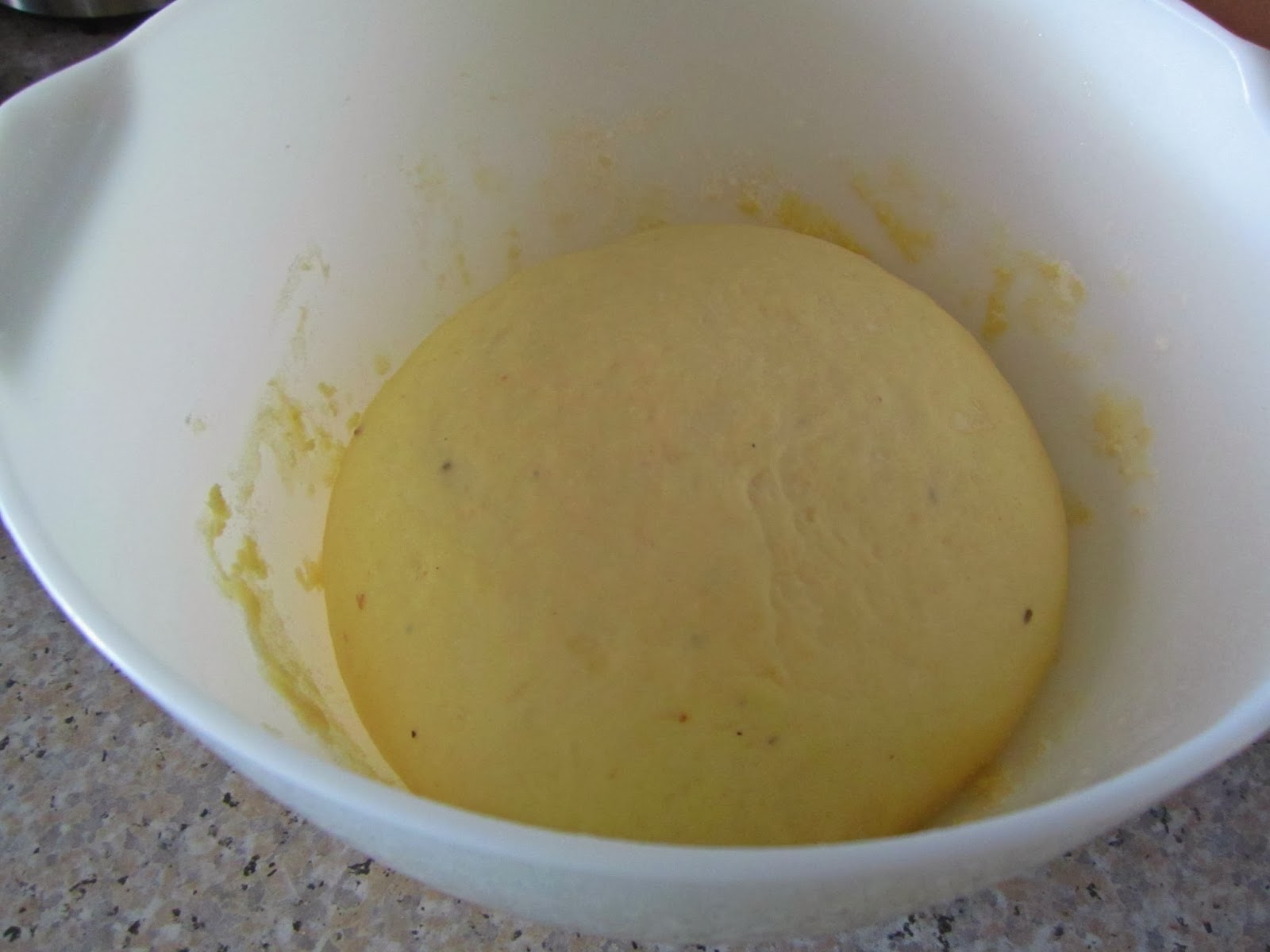 It was about an hour later when it doubled in size and was ready to work with again. At this point, I worked with the dough lightly, cut it into four sections and then took a small piece out of each section to save for the central decoration later. At this point, I heated up the oven to 180C. 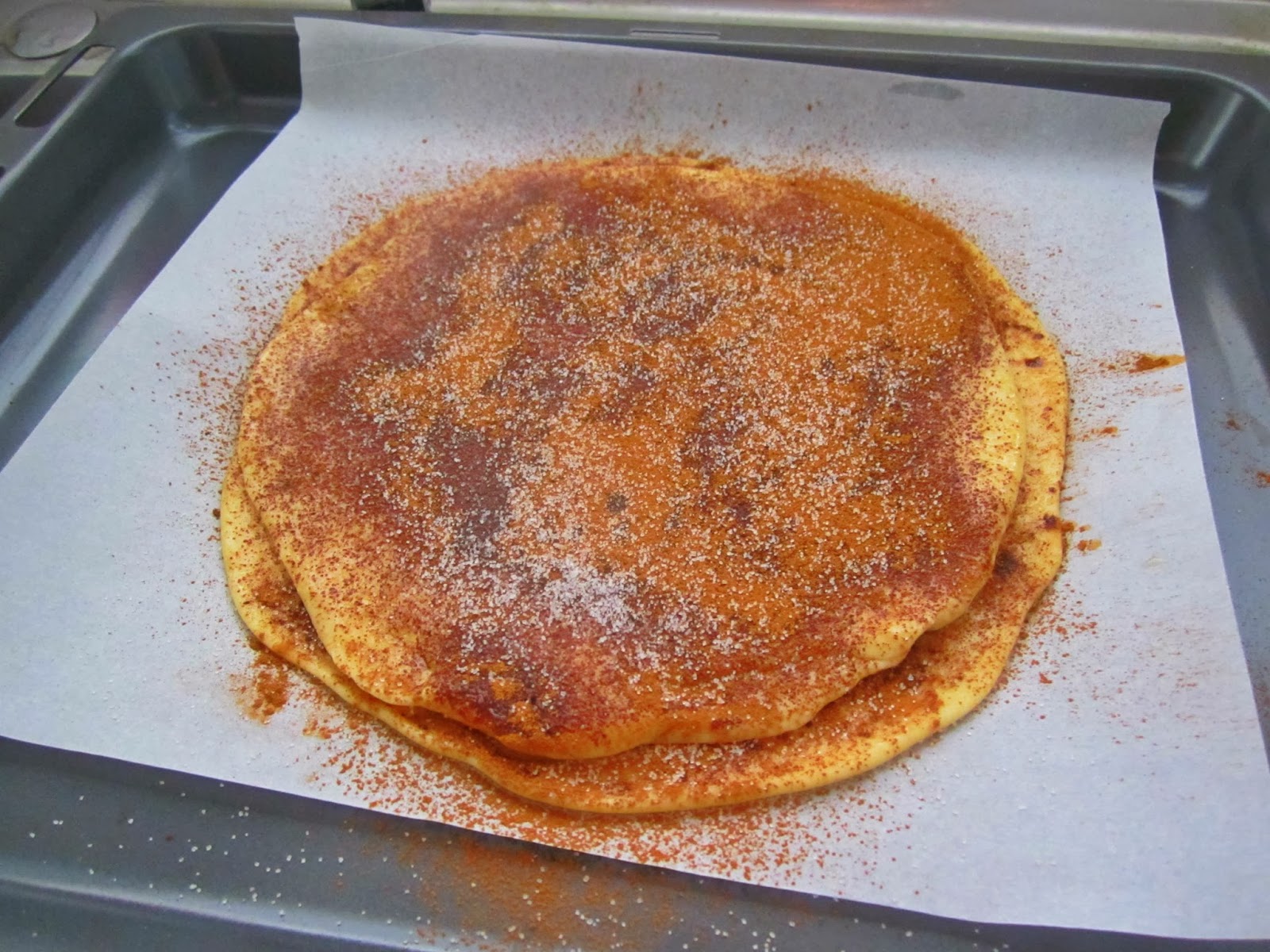 Each of the pieces was rolled into a flat pizza like shape. Between each layer I brushed some melted butter, sprinkled with sugar and dusted over cinnamon. 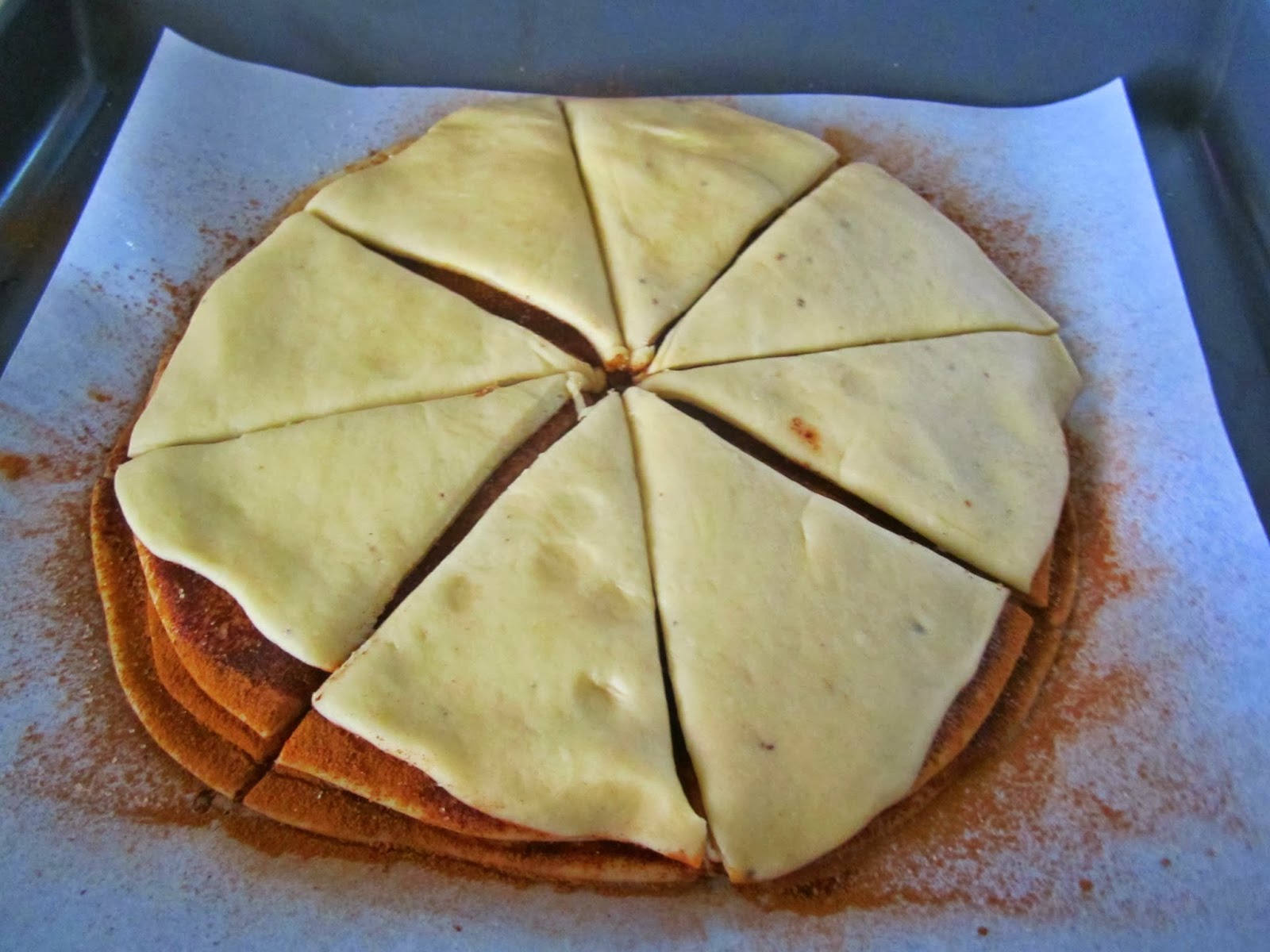 There was no cinnamon dusting for the top. After the final piece was laid down, I cut the bread into eight portions. 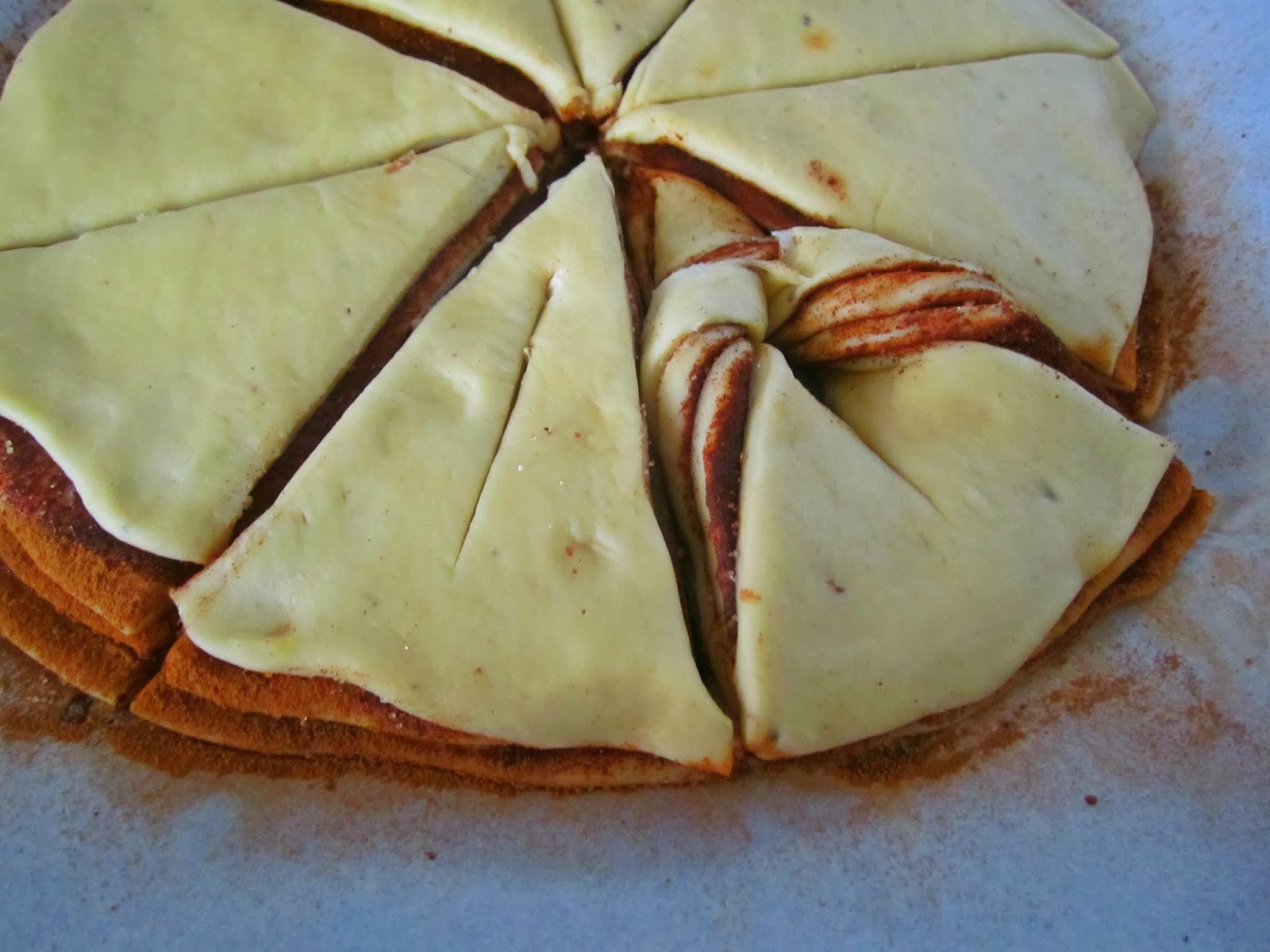 On each of the portions, a slit was cut down the middle of the triangle but not all the way to the edge. Just a slit in the middle. 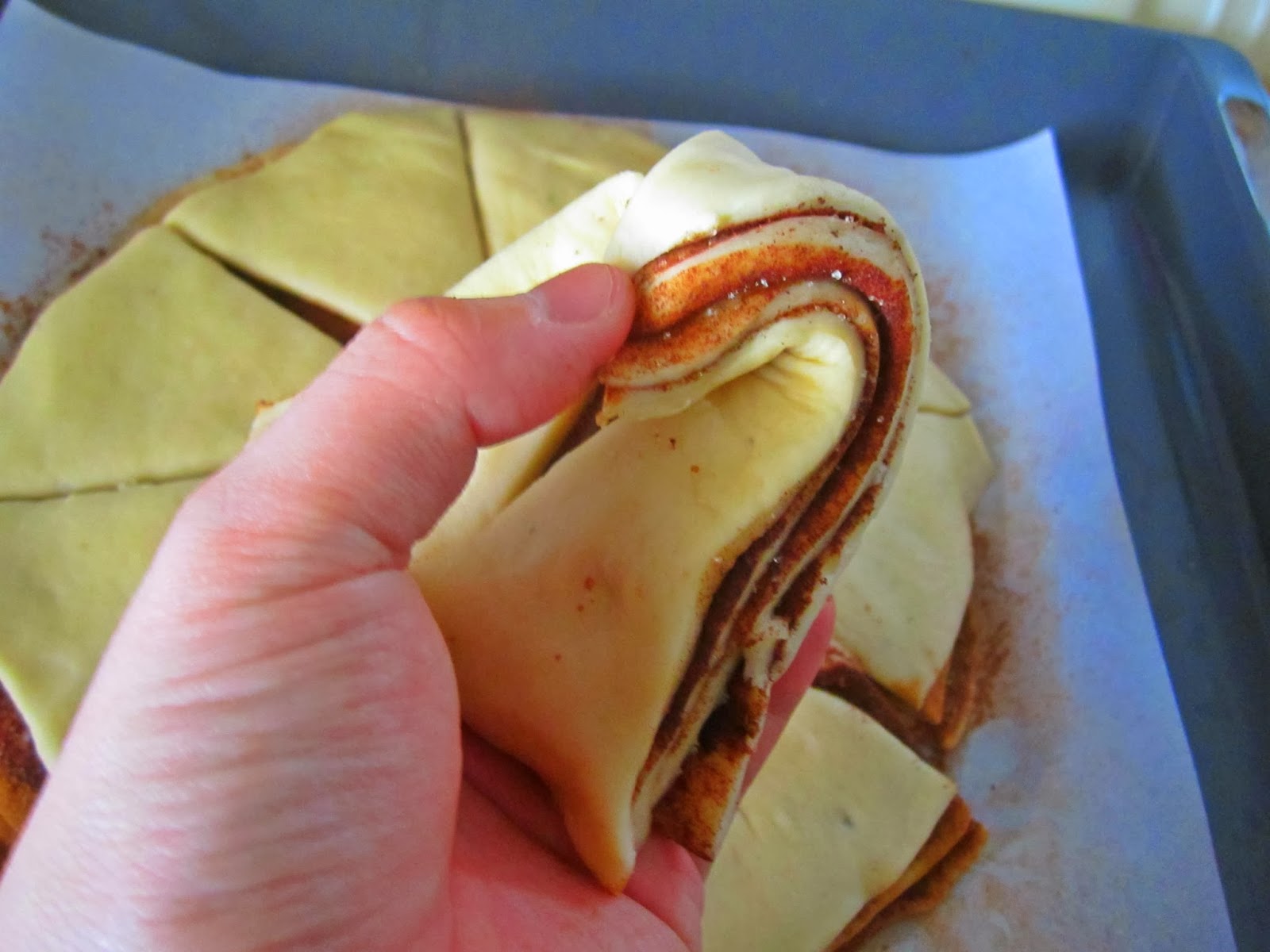 For each piece, the narrow tip is bent backwards and then pushed into the slit that was cut. 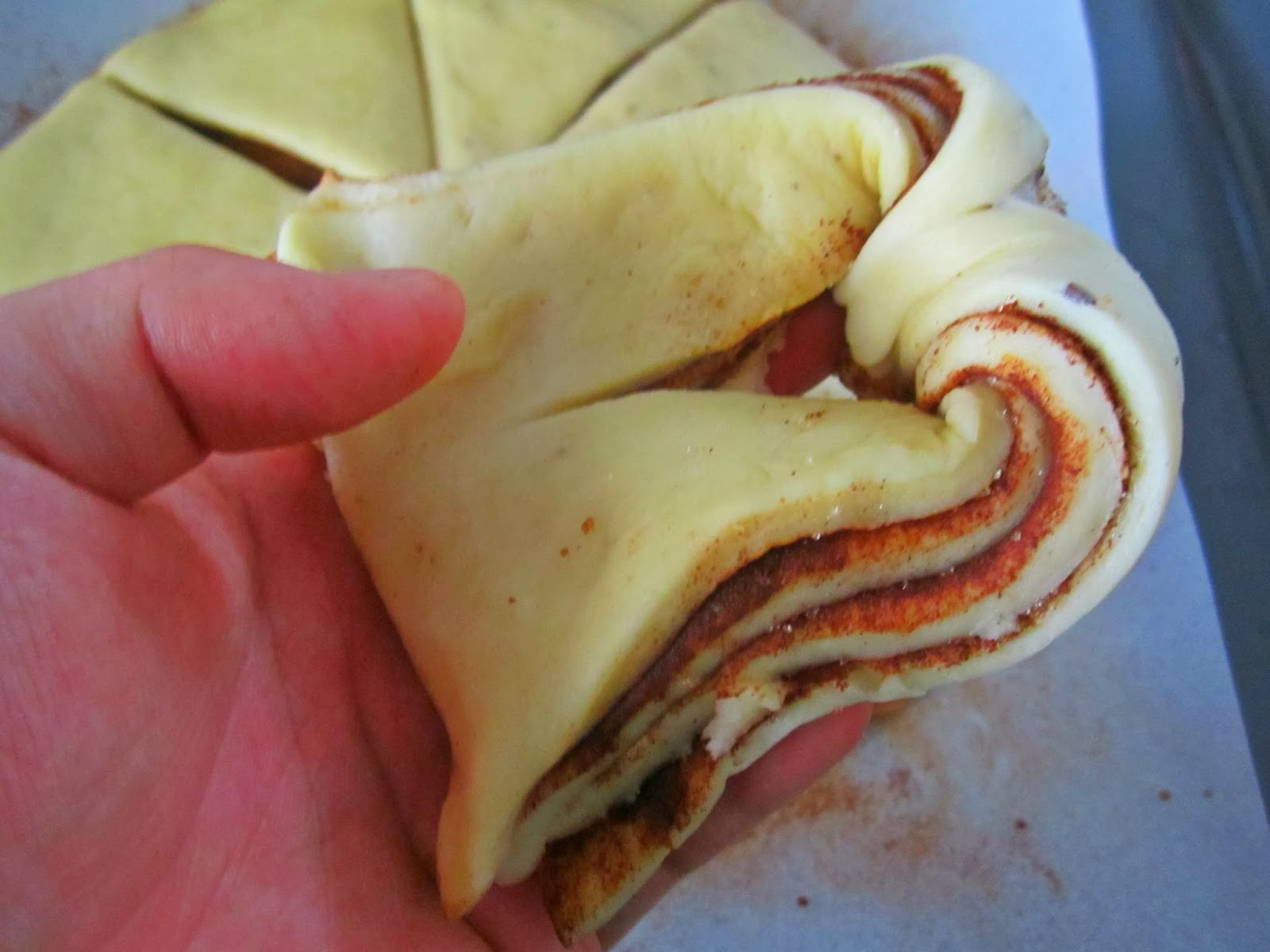 Then pushed all the way through. 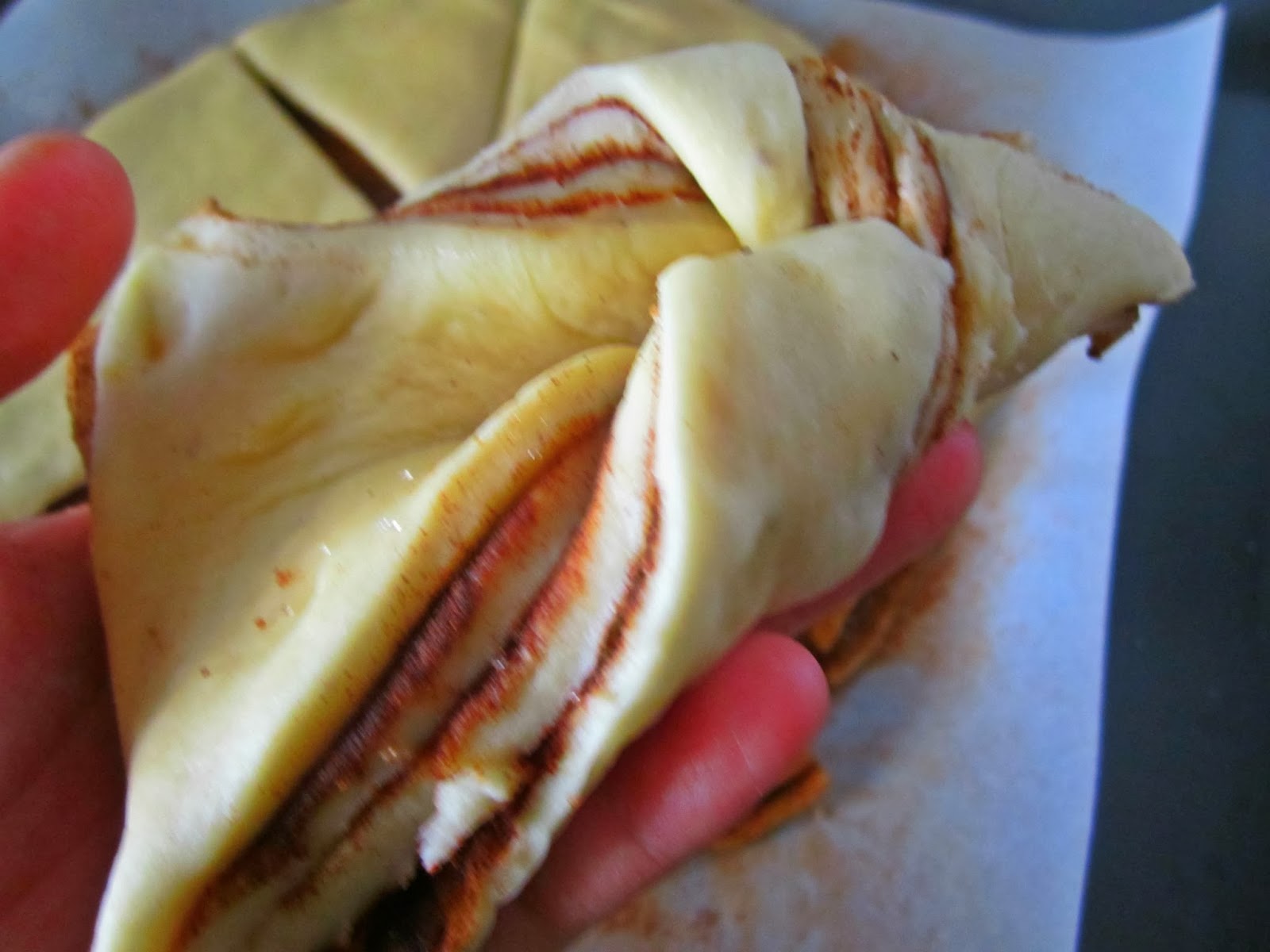 And finally pulled out the other side and given a tug to reach just about the same length as it was before. 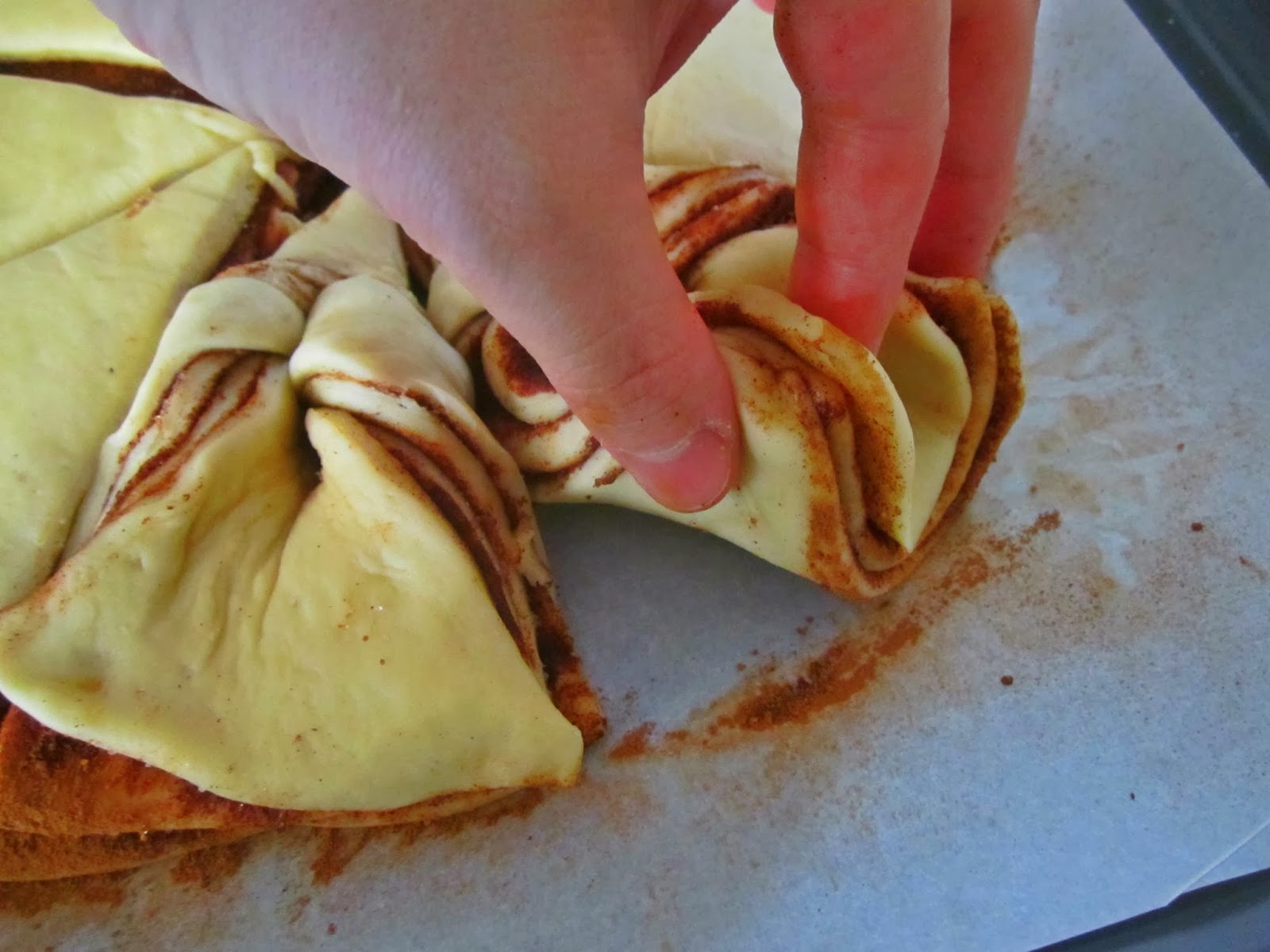 The back ends of each piece was then pinched together. 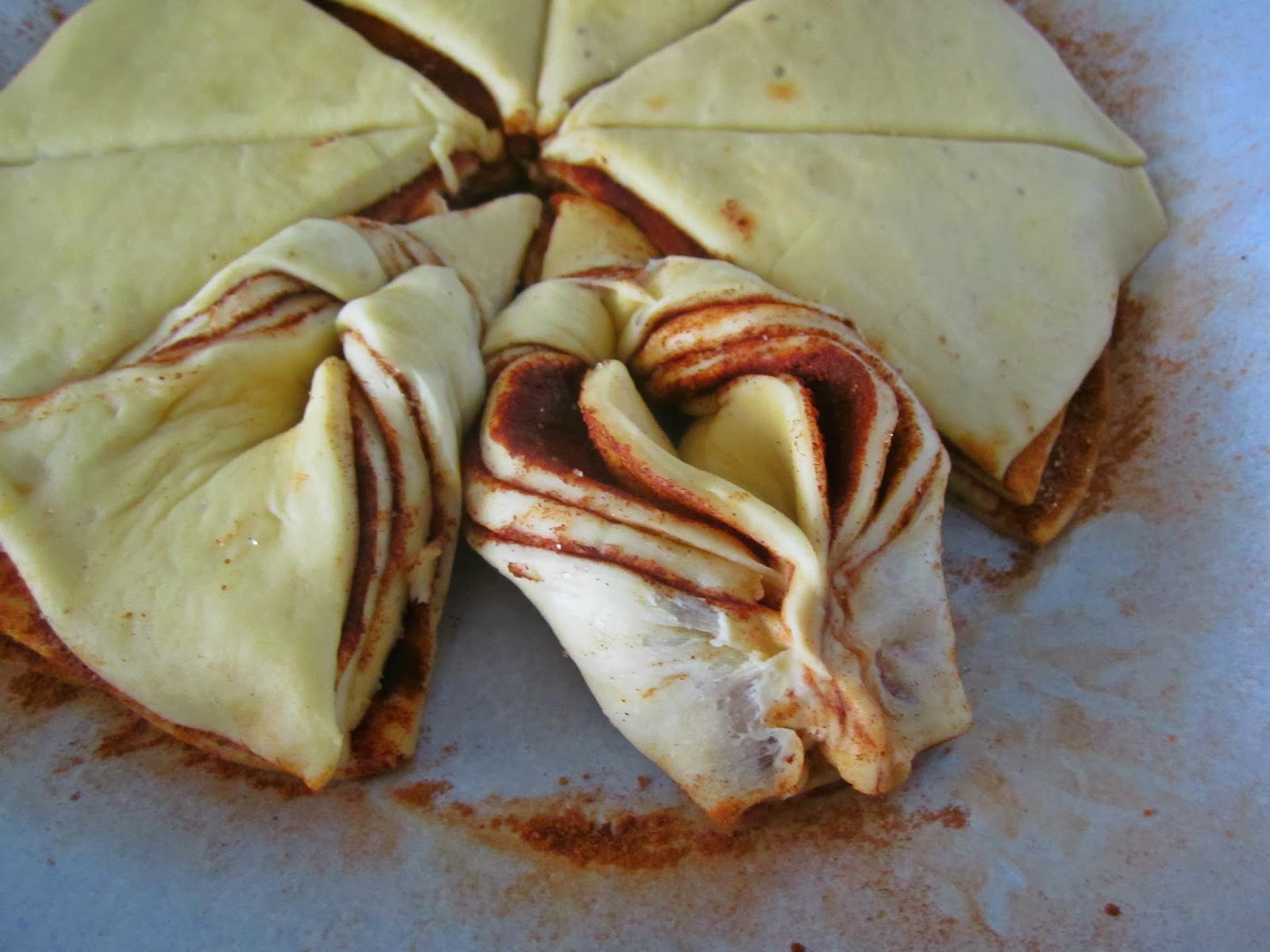 All eight pieces had this decoration done to it. 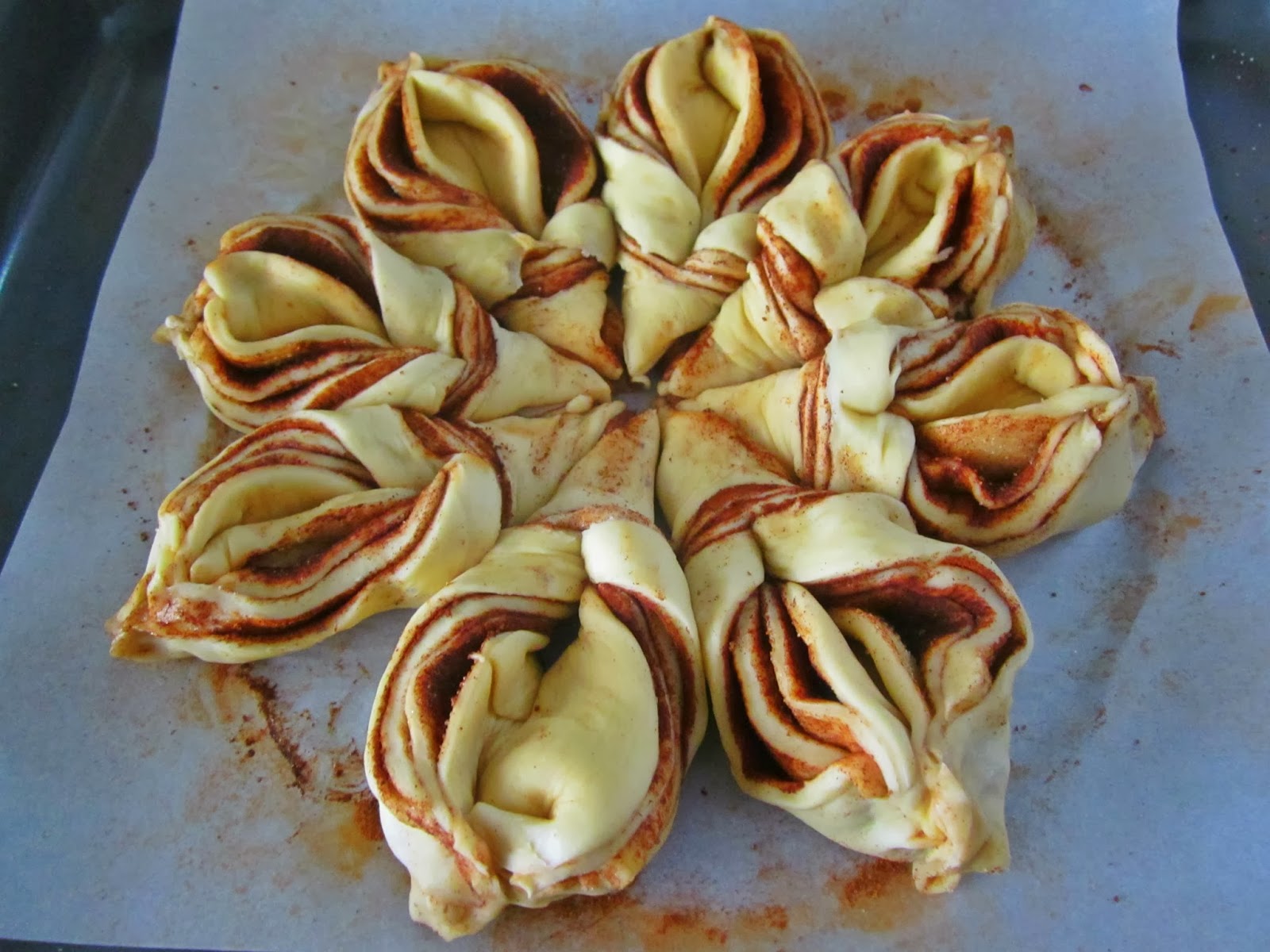 And the end result is this pretty little flower shape. But we're not done yet. Remember that remainder that we kept? 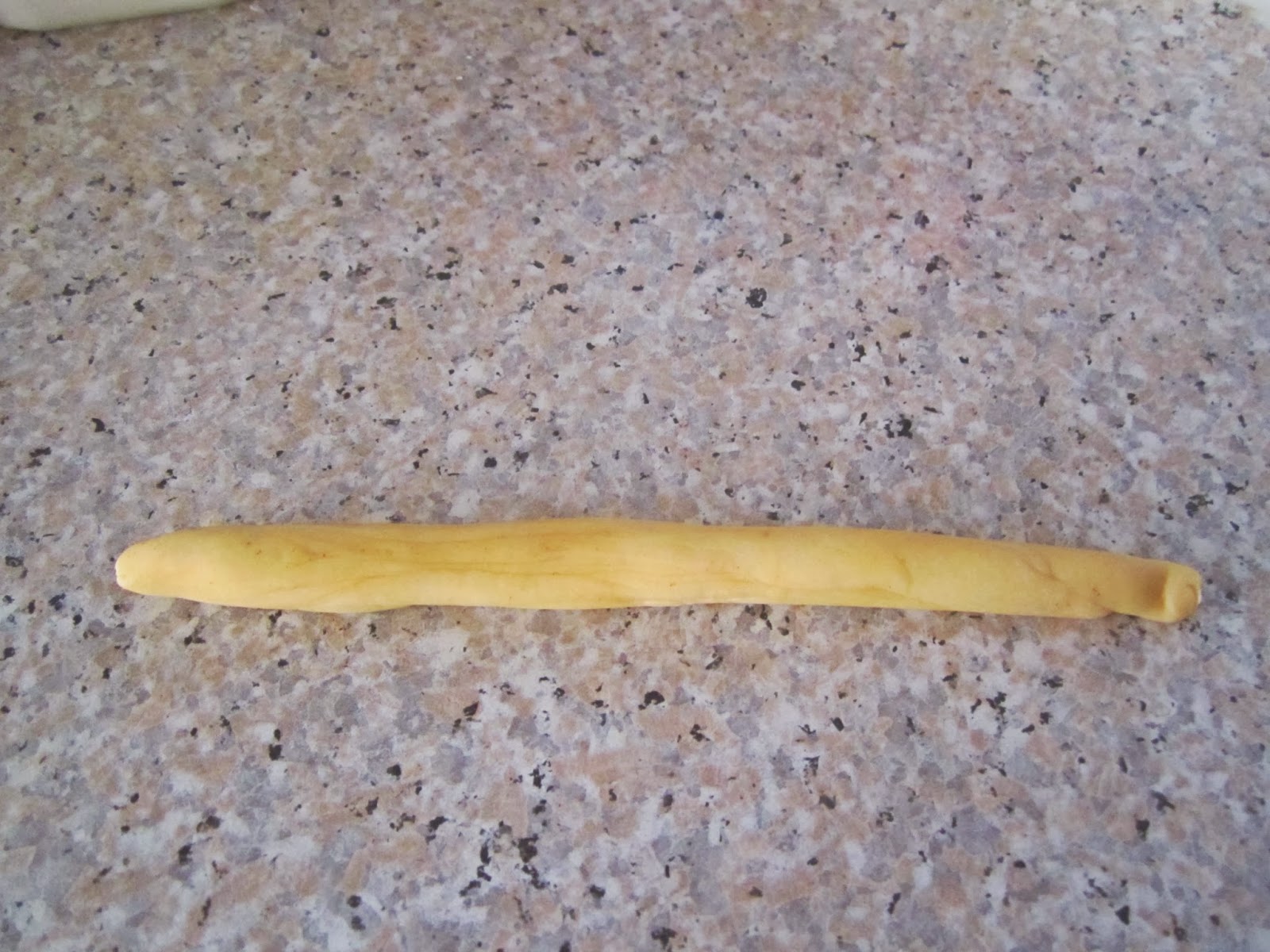 I rolled this out into a long tube. Then let it rest to relax a few minutes. 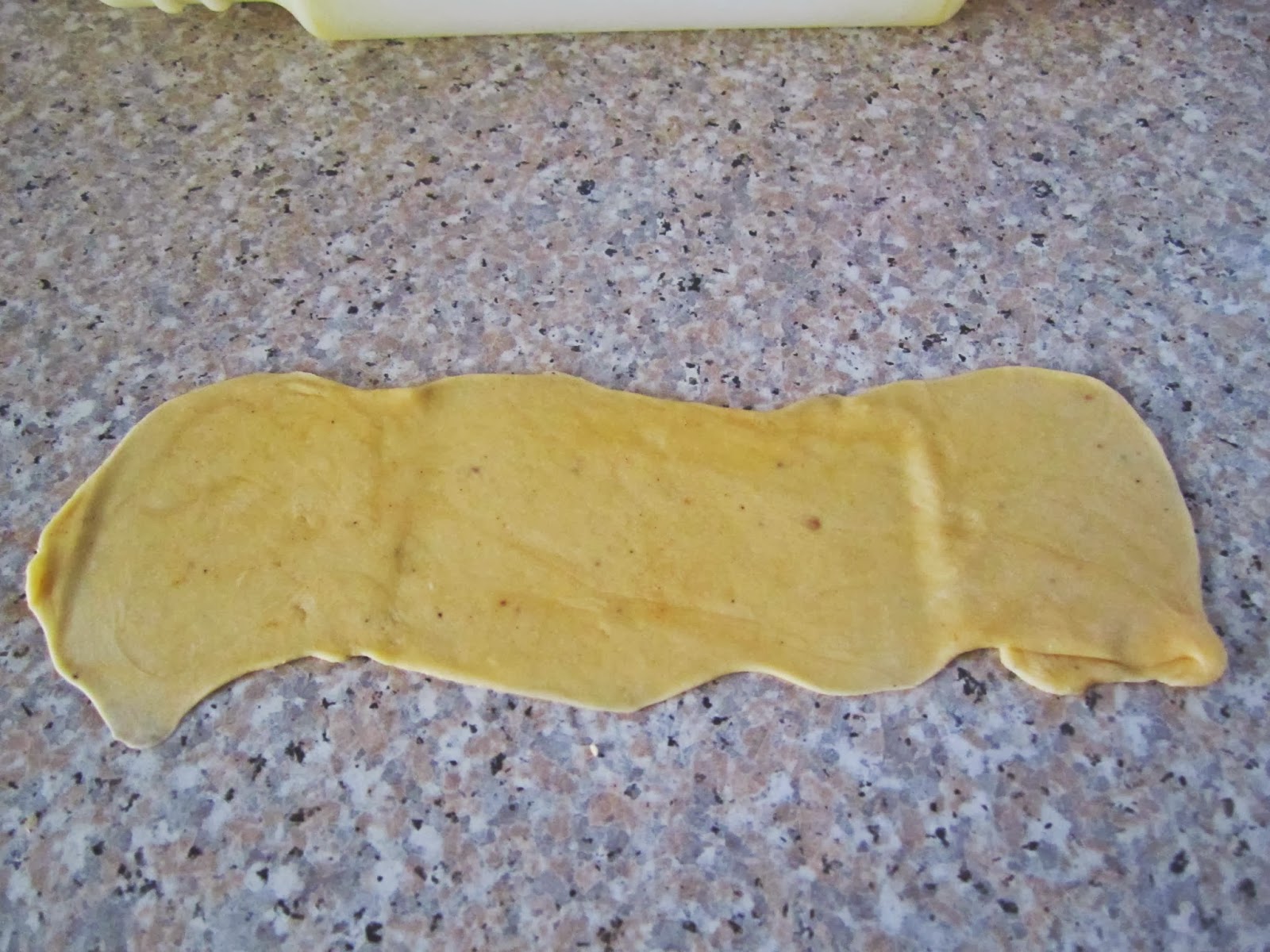 I then took a rolling pin to it and rolled it out into a...fairly rectangular piece. Size doesn't really matter here as long as you have a rectangle. 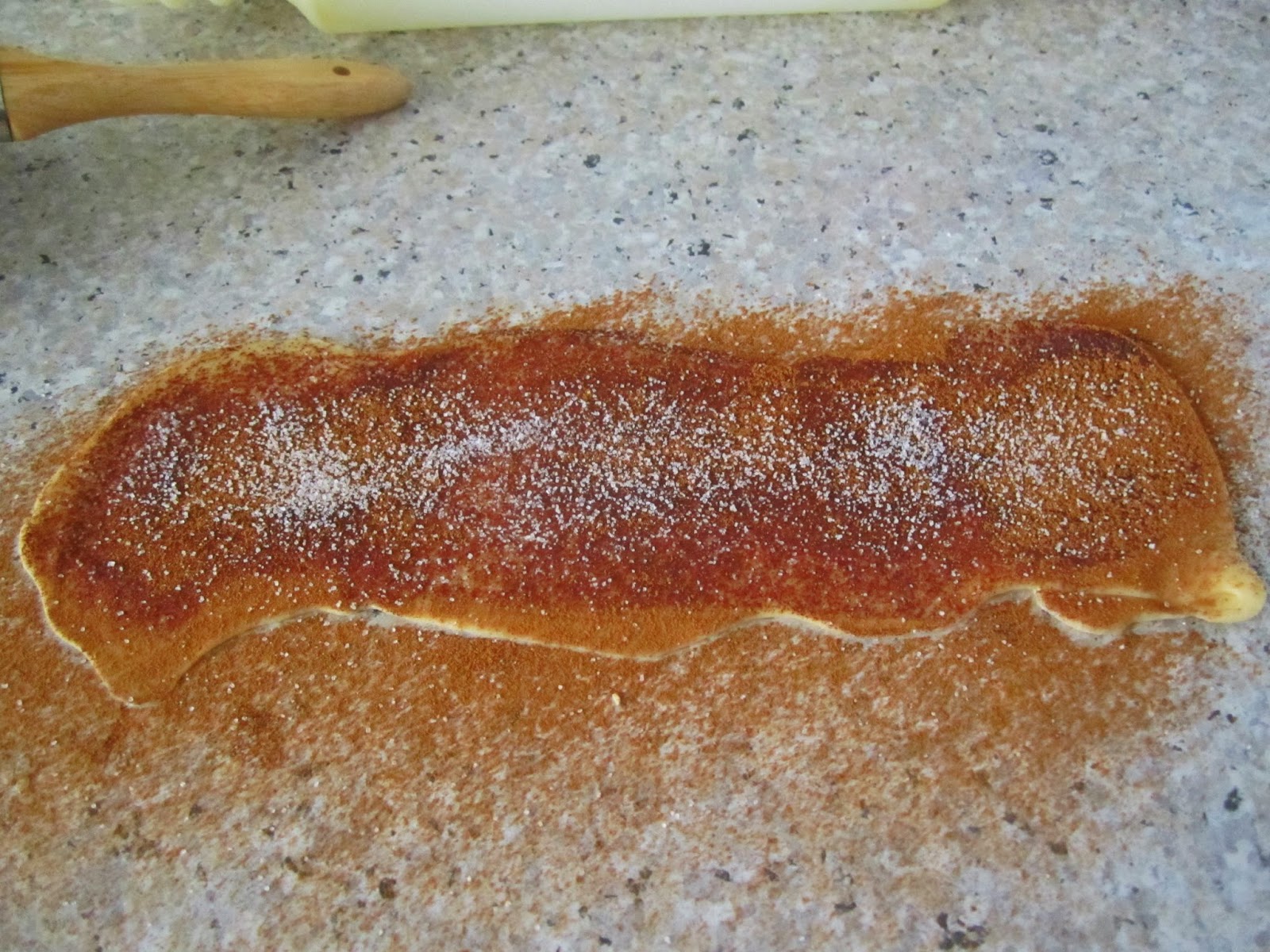 I then did the same to this piece with the butter, sugar and cinnamon. 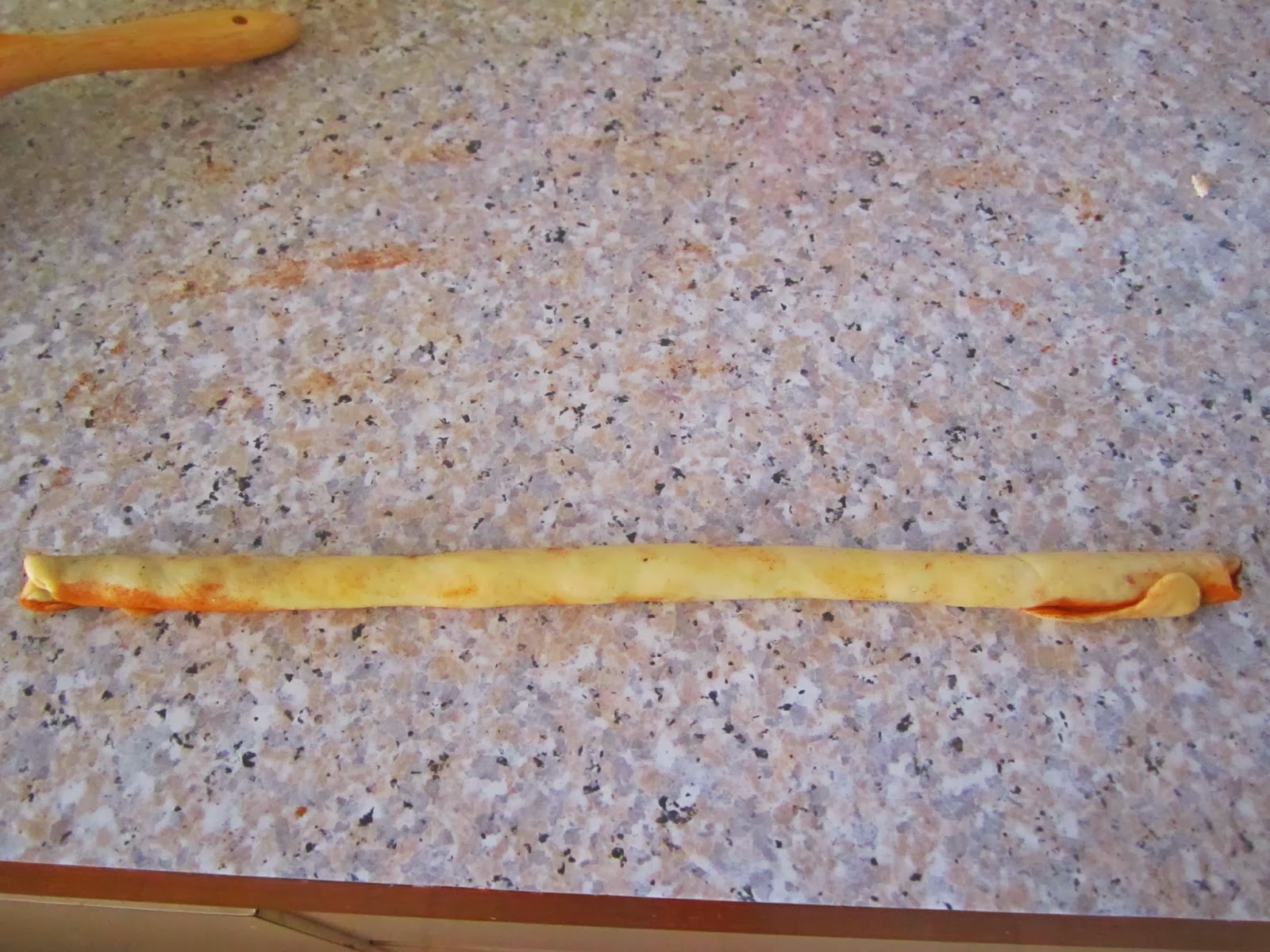 Then rolled it back up into a tight log. The last part is a teensy bit tricky but worth it. 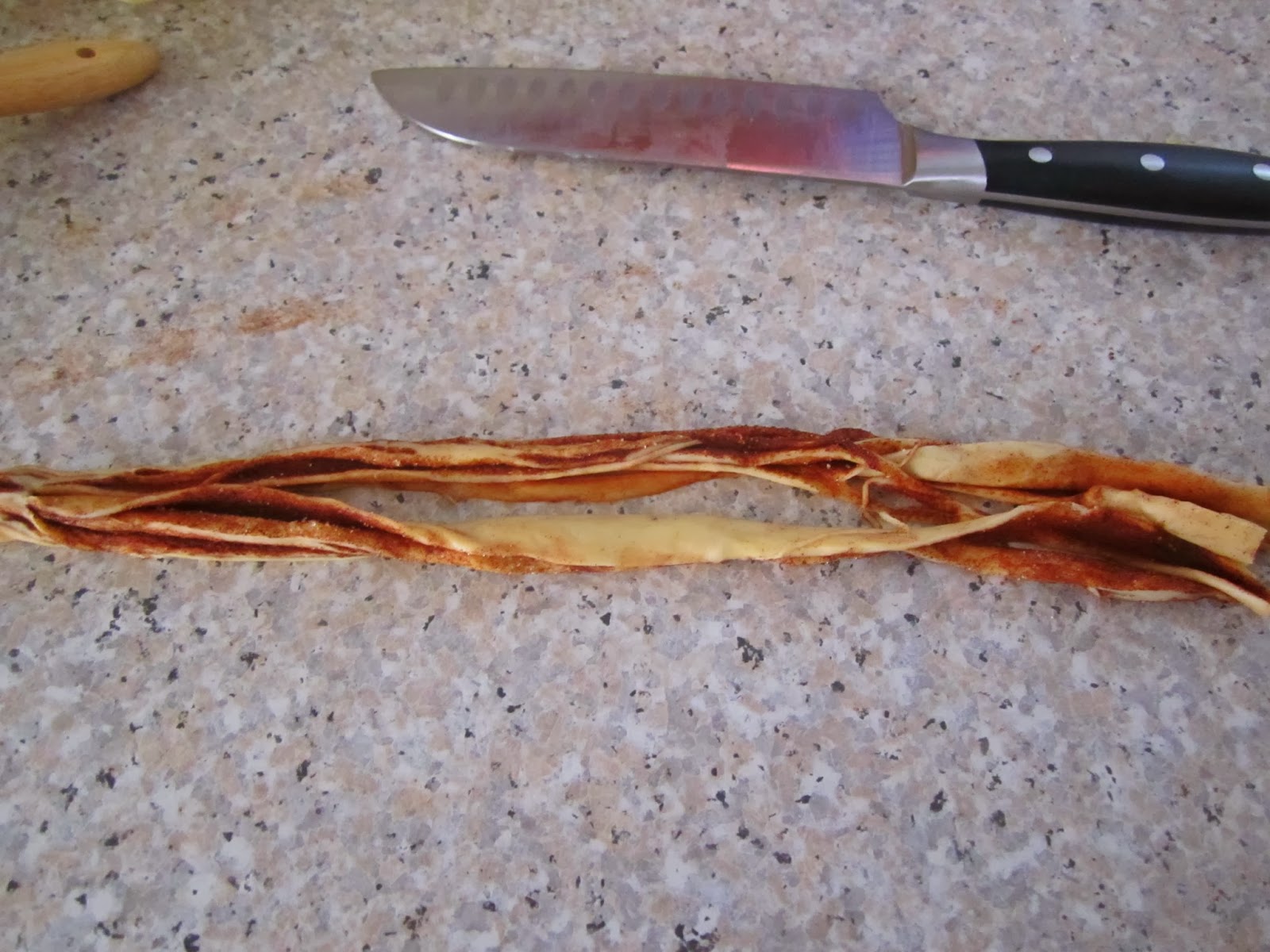 Grab a sharp knife and cut through the centre of this log all the way through so if splits into two halves. Then lay the halves back to back (so that the white parts meet). 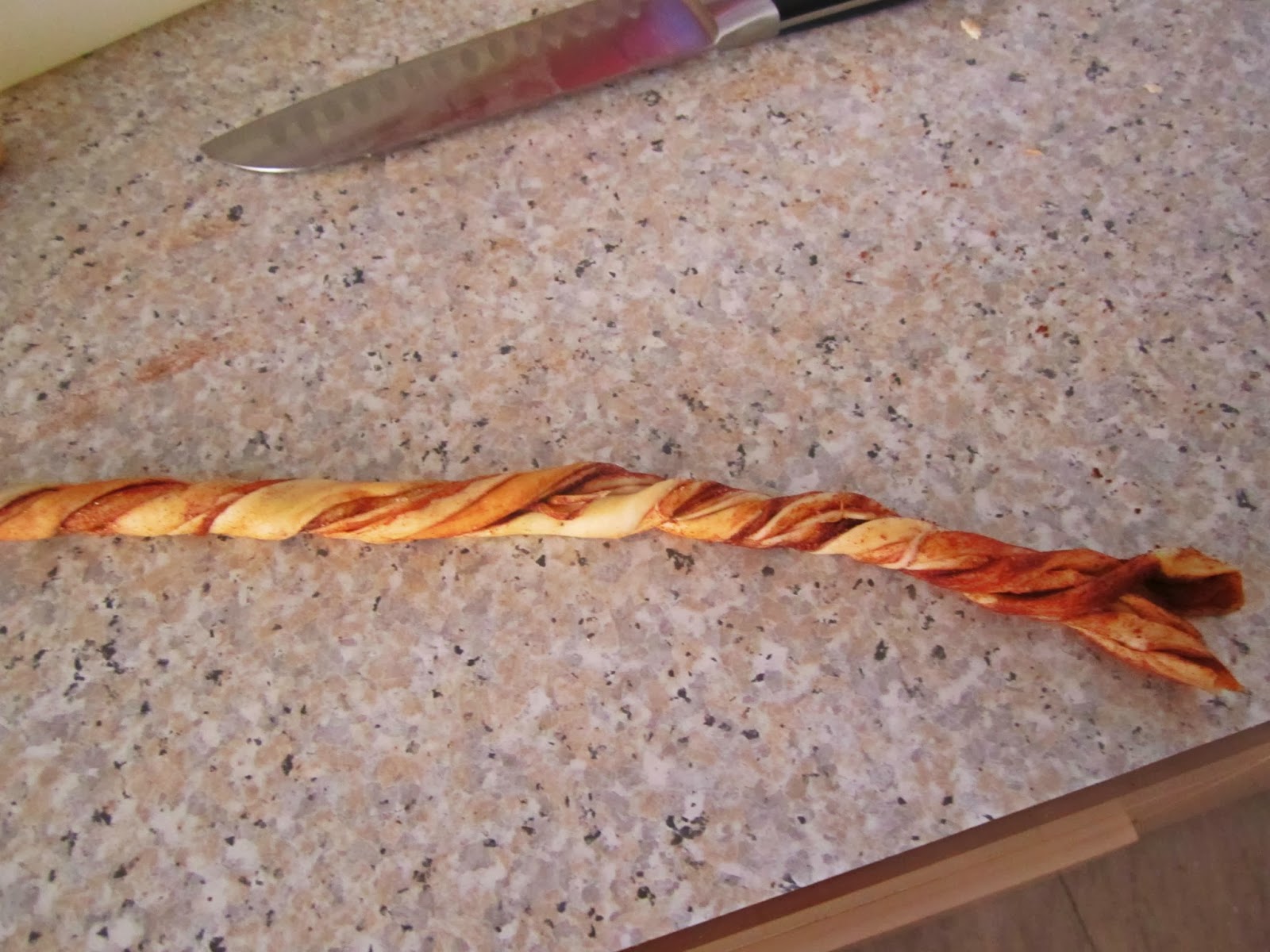 Put one hand on each side and roll in opposite directions and you get a beautiful little twist. So my left hand moved downwards and my right hand moved upwards. 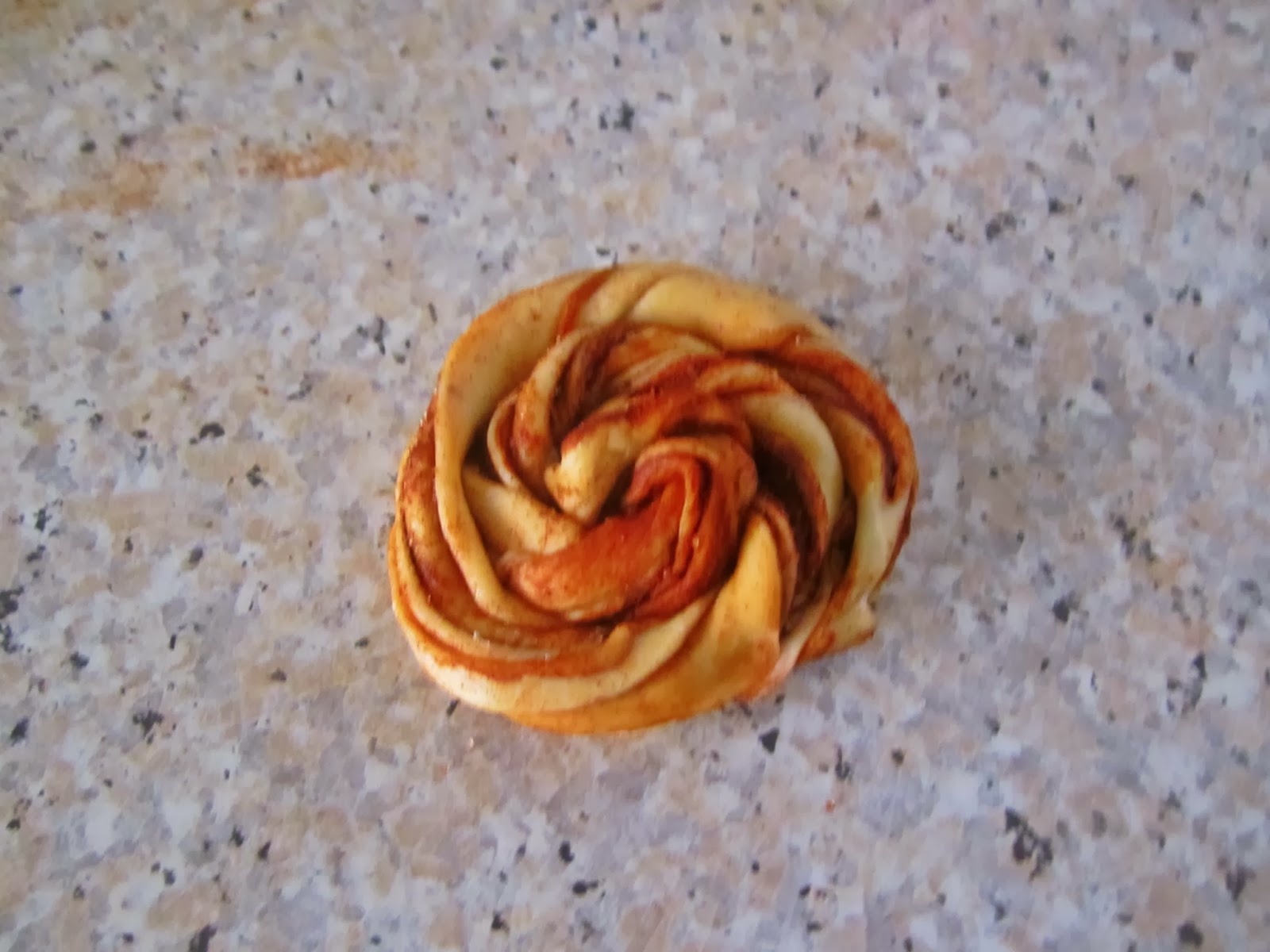 Then I coiled it together into this shape and  put it in the centre of my original bread creation. 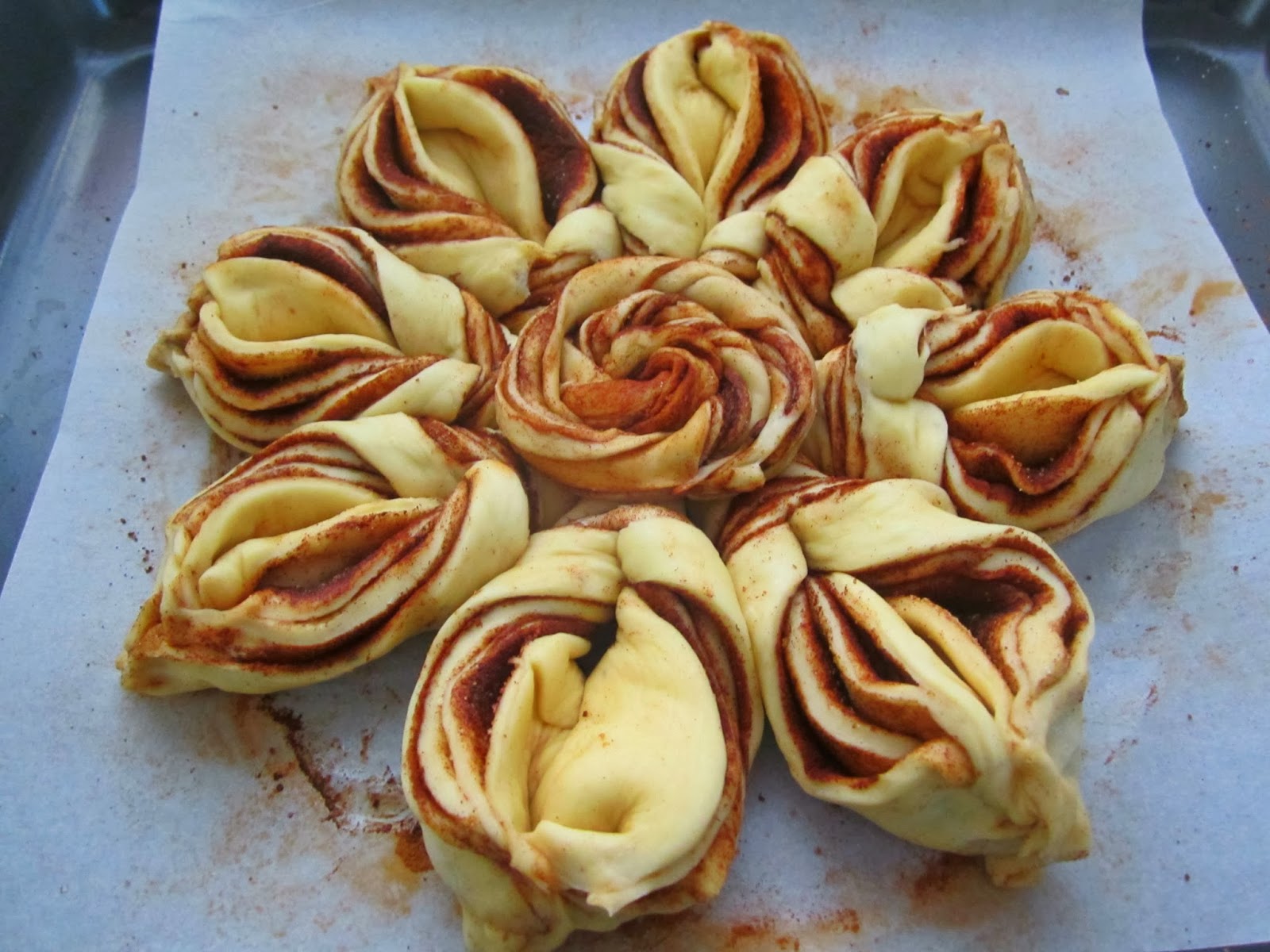 I brushed over the remaining butter and put it in the oven for about 20 minutes. 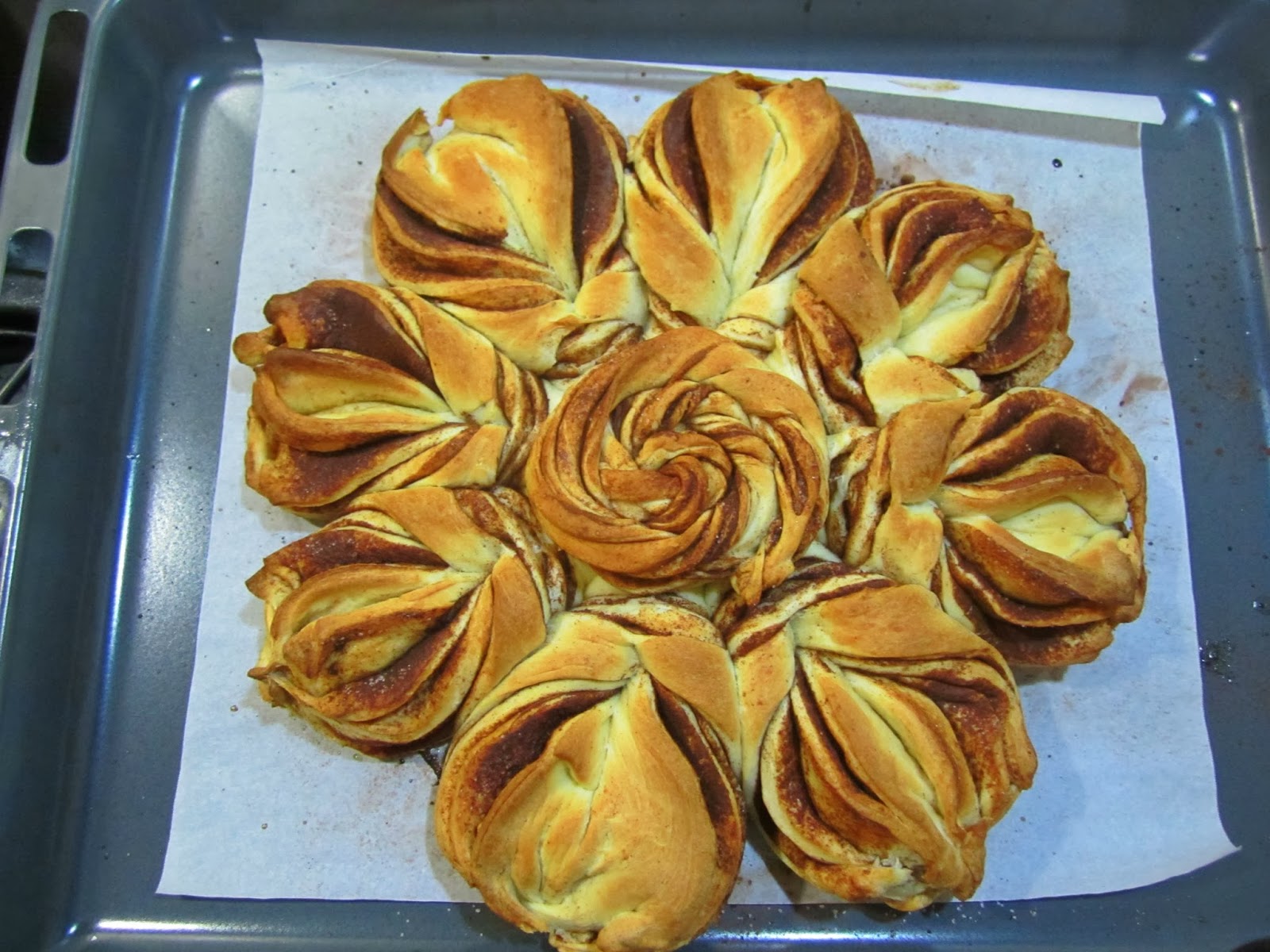 And you get this beautiful little floral shaped cinnamon bread. 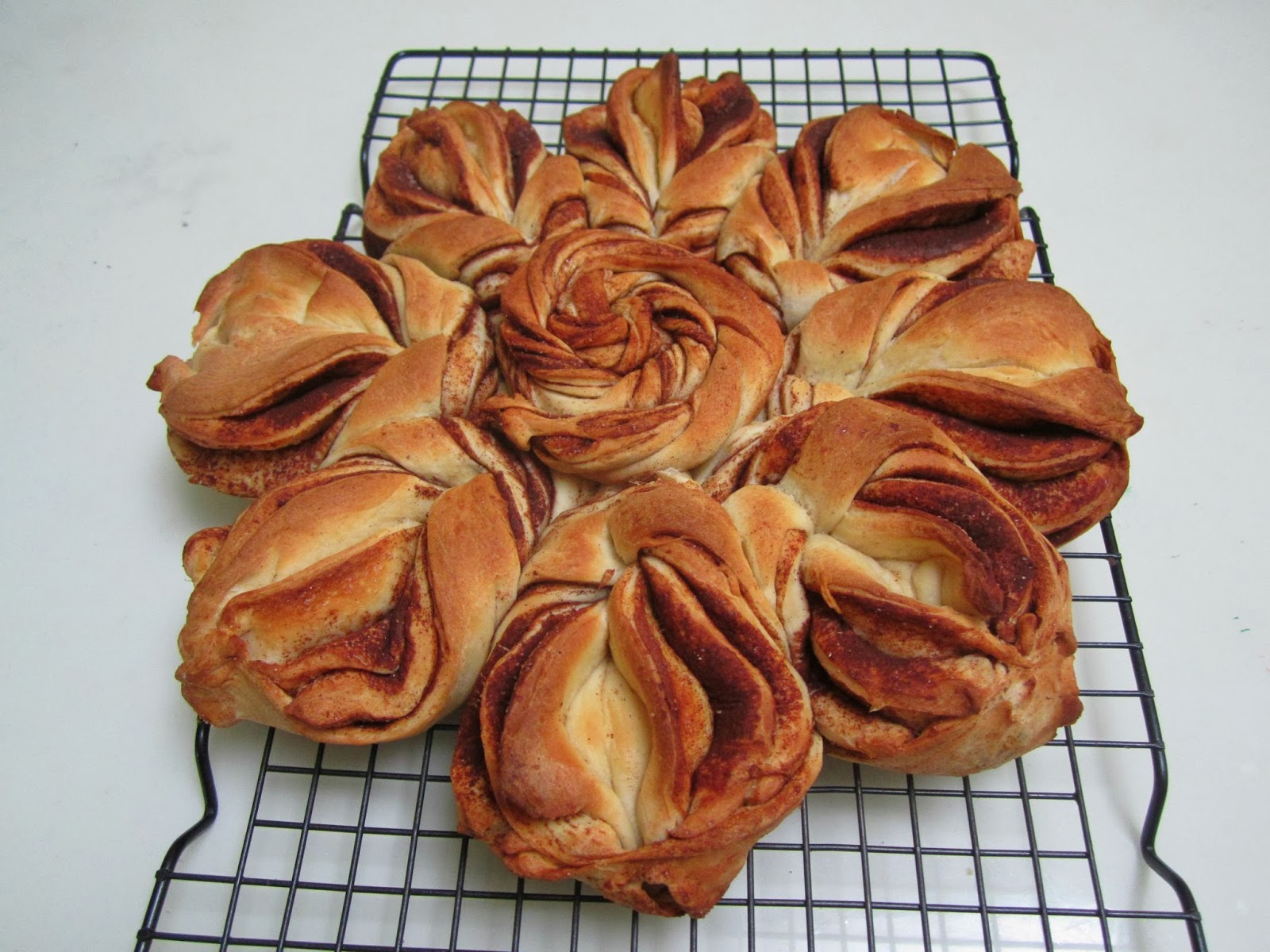 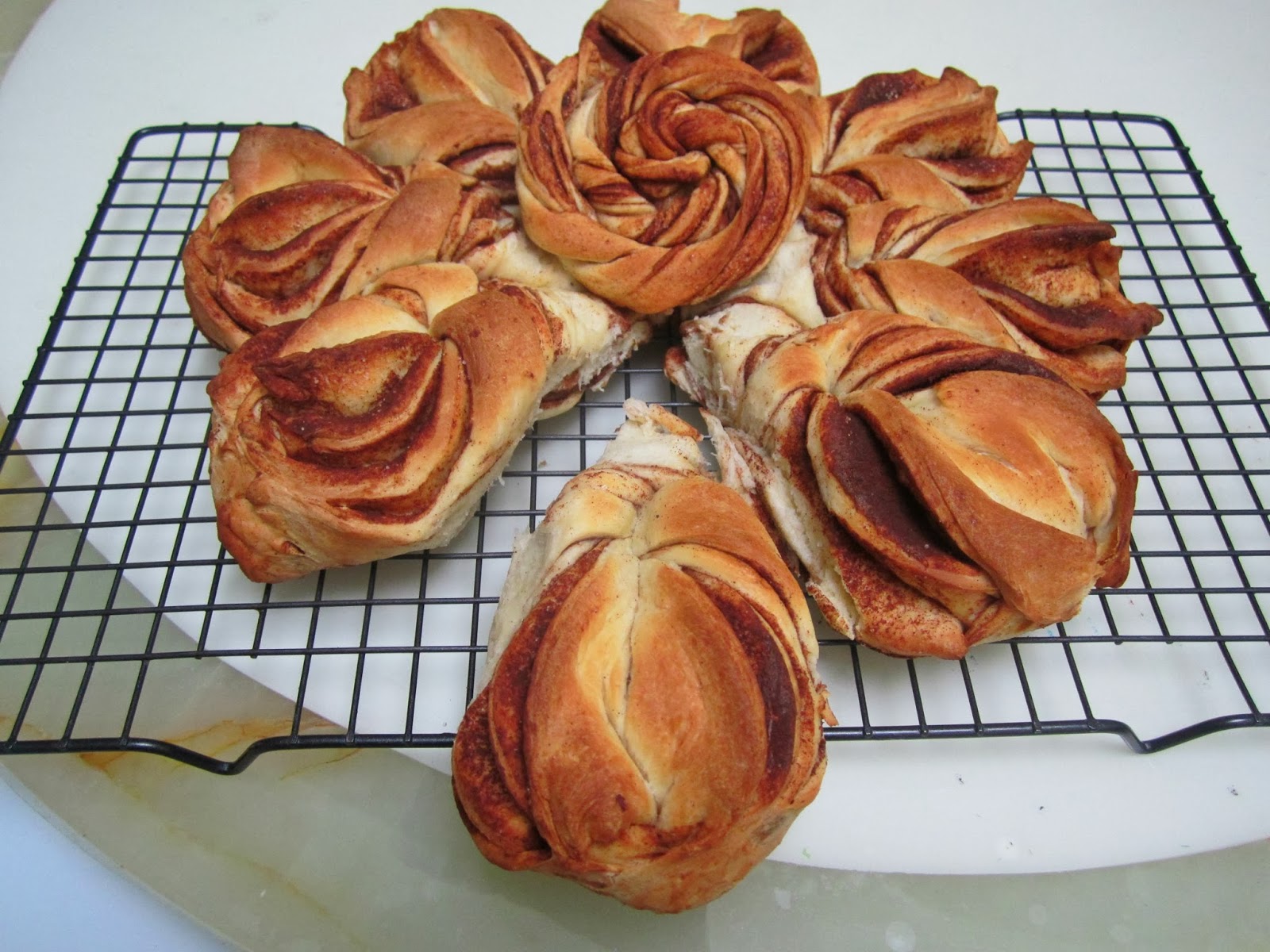 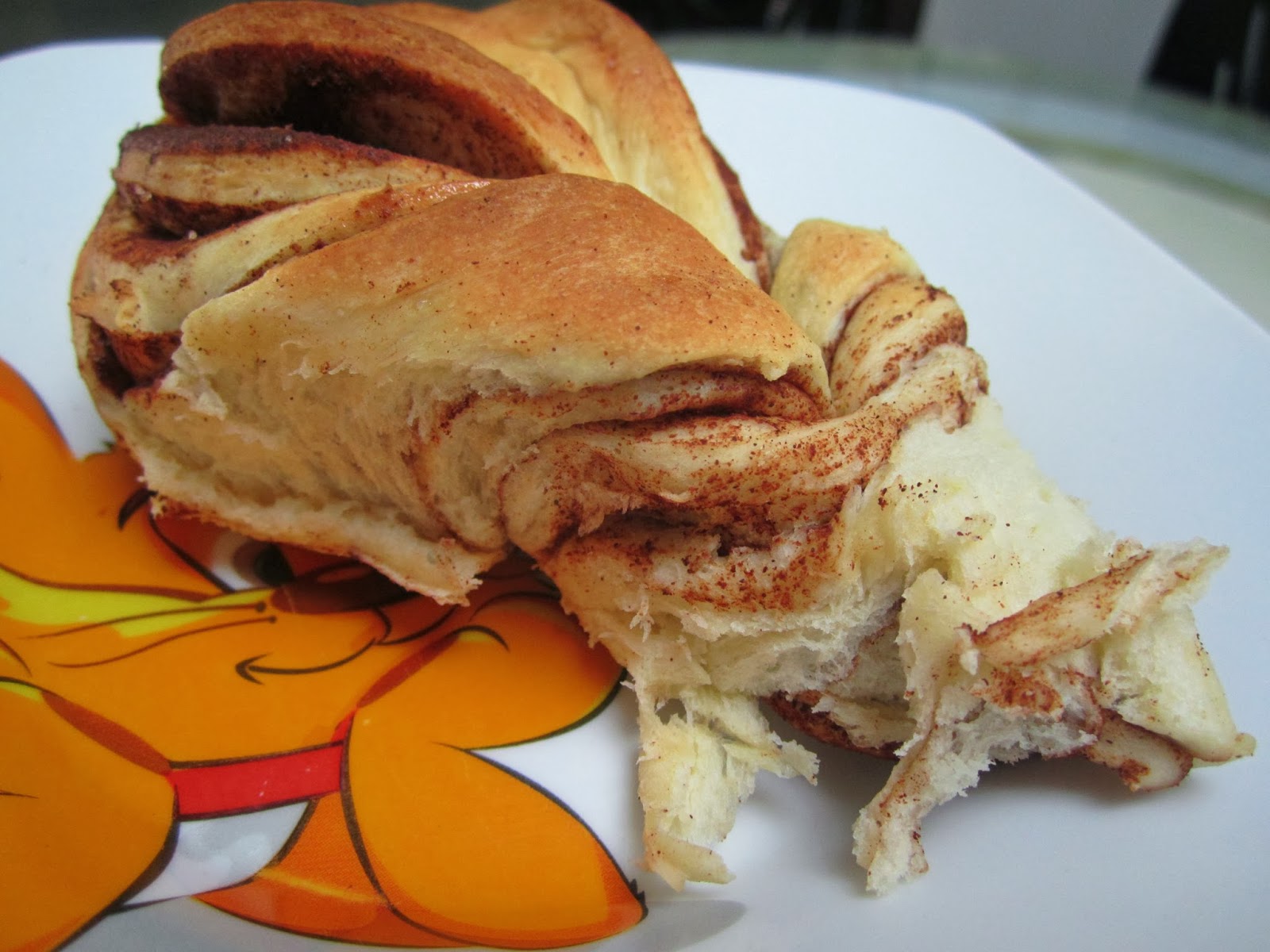