January 03, 2014
In my day to day life, I earn a living working for a bank. So when I have one of my days off, I like to spend it either in my room surrounded by yarn or in the kitchen, baking or cooking all the things. Today I did a little mixture of both. With the growlithe head completed, I thought I'd head into the kitchen and make up a quick lemon tart. 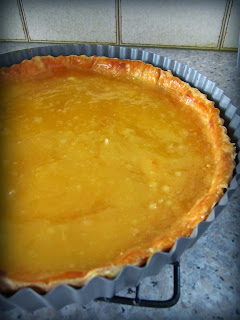 There isn't a recipe for this one. As I was using up the leftover lemon curd that I had made when I was trying out Mary Berry's Angelfood Cake recipe. I was going to take photos of making up a shortcrust pastry but I found out that I had a shortcrust that was frozen from a short while back that I had to use up so I used that first.

It turned out okay. I would have preferred to have made something from scratch but for a relaxing time in the kitchen it was good. I also baked something else but that is going to be revealed at the end of this month as a part of the Challenge for this month. So I'm quite excited to reveal that later!

I have been watching a lot of the British Bake Off recently. This has also left me in the mood to bake a lot more than I used to (which can be a good or a bad thing). So hopefully this blog will fill up with a lot of tasty things as well as a lot of fun to make things!