January 05, 2014
I spent a good part of my day crocheting today but I decided to take some time out (...ended up being about 6 hours of my time out) to cook something that I really enjoy eating. Now I have a stash in the freezer that will last me a good few months. Go me!

I got a lot of my inspiration from Not Quite Nigella for these little dumplings but the recipe was quite altered by myself and my mum as we journeyed around the shopping centre and tried to make this recipe without it ending up being more expensive than buying it by the box down at the local chinese store.

Also, a lot of what I needed was in the pantry and freezer at home already so it wasn't too bad. These little babies require a lot of patience, dedication and the willingness to live through a sore back at the end but I do recommend everyone giving these a go at least once.

I'll probably give them a go again in a few months and hopefully master my technique then. :)

Soup Ingredients
* 100g bertocchi leg ham (that's what I used as it was recommended to me, it tasted lightly cured and a little salty but I think that's what I needed)
* 2 litres water
* a few slices of ginger
* 3 cloves of garlic
* 2 tsp chinese rice wine
* chicken bones
* pork bone
* 2 tbs gelatin powder 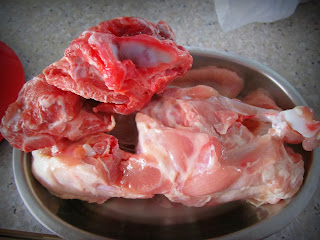 I used a whole chicken carcass, my mum had already stripped most of the meat off for dinner the previous night and she had some pork bones in the freezer I could use as well. She taught me how to break down a chicken once...but I still have yet to really master that technique. 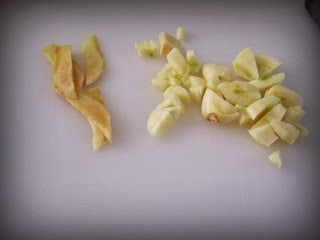 The garlic was lightly chopped as was the ginger. This was all thrown into the pot of water and wasn't eaten so it didn't need to be finely diced or anything. 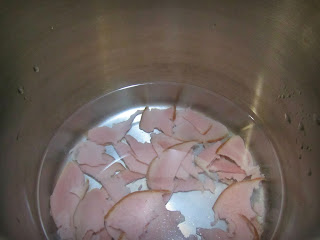 I started by throwing the ham in the water but then I added everything bar the gelatin and brought it to the boil. After that I had the pot simmering on the stove for a good 2 hours. I only used 4 cups of the stock for the dumplings. The rest of the stock we made into a simple soup and had it for dinner.

We threw in some bak choy, fish balls and the meat we scrounged off the bone and let that simmer for a bit till the vegies were soft. Added a little salt and pepper and voila! Tasty soup :) The stock doesn't need to be seasoned for the shanghai dumplings however. The filling is a tad over salty but when it steams with the gelatin mixture it all balances out perfectly. 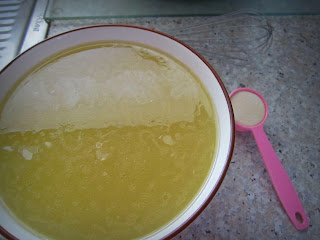 With the four cups of stock, I put it into a bowl while it was hot and whisked in the two tablespoons of gelatin powder. I hear if you use pork belly (or keep the tasty belly for dinner and just throw in the generous amount of pork skin) you don't need to use gelatin. But mum was not sacrificing the expensive pork belly and we didn't feel the urge to buy pork skin (saw it at the local shops) as we had the bones in the freezer already and the gelatin was already in my drawer at home.

This was then left to set in the fridge for the next few hours. (Actually...I got impatient and stuck it in the freezer for twenty minutes..just don't forget it and leave it in there.) 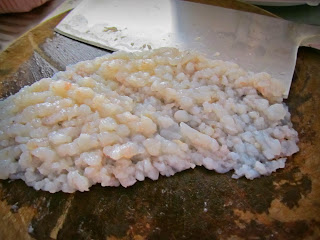 Meanwhile I got to making the filling. 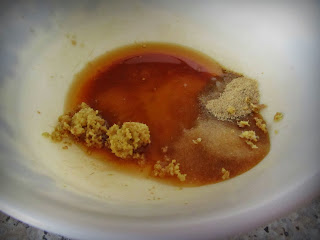 I combined all the other ingredients into the bowl first. Mainly for the reason that if I didn't do that, I would most likely forget something. 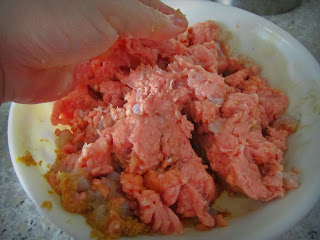 Then comes the fun messy part. Add the meat in and smoosh it all together. Make sure you really combine it all so someone doesn't get a mouthful of a lump of all the flavourings. 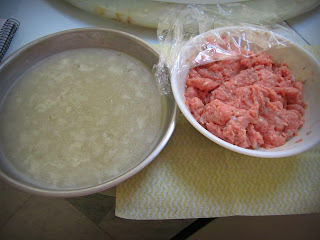 When the gelatin had set, I mixed in half of the gelatin mixture into the meat and made sure to smoosh that all together as well. 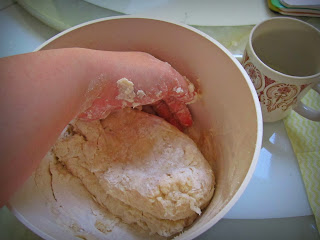 I put that mixture back into the fridge and set about making the dough.

I tend to knead all my dough by hand as I enjoy working with it, but this step can also be done in a mixer with the dough hook if you don't enjoy that kind of physical labour. First add the how water to the flour in the bowl. Gently mix it until it combines into a dough. When that has happened I add the oil and just enough of the cold water that it combines without feeling too sticky.

After that is complete, I spend the next ten minutes or so kneading it until it feels elastic.

The next part of it is very assembly line to put it all together. 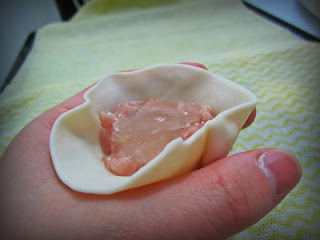 I have two damp clothes nearby. One to cover the unused dough, the other to cover the finished dumplings so they don't develop an icky skin on the outside. Then I roll about 1/8 of the dough into a log and start cutting off the chunks I need.

For each little chunk that you aren't using, make sure it is covered by the damp cloth or it'll develop a gross skin on the top. But I take one little chunk roll it gently into a ball and then use a rolling pin to roll it into a disc. The trick is to roll it flat enough but not too flat because if it's too flat, it won't hold the meat and soup in. I also had the leftover jelly nearby as we like a really soupy dumpling.

I would add half a teaspoon of the meat/gelatin mixture into the dumpling skin and then add another small slice of the gelatin mixture on top to ensure a very soupy dumpling. 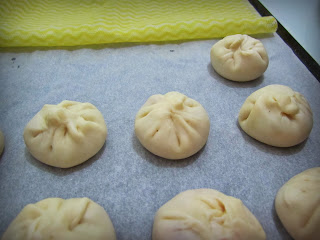 I think I made about 60 of these all together. When you get into a rhythm it's quite enjoyable. 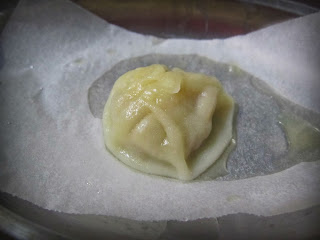 And  then we steam the final result and eat the fruits of our ... my labour! Steam it for about 12 - 14 minutes. This one leaked a little bit which proves my technique isn't the most amazing yet but I will get better. I intend on using this recipe again because it was really delicious and I'm sure every few months I can put aside a day to restock my freezer.

Very well worth it.