My name is May and I started crocheting in August of 2012. Since then I've been obsessively making so many different things and one of my goals in life was to crochet at least one of every single pokemon in existence. ...this year I found out that goal has been pushed out since another one hundred is about to be added to my list! Oh drat! But that's all good, more things for me to make.

Recently, however, my goal has been updated. Not only do I want to make one of every pokemon, I also want to make a crochet pattern for every single pokemon too!

Some of the patterns I write will be released right onto here. Other patterns can be found at ravelry and storenvy and I'll announce them onto here as I make them. 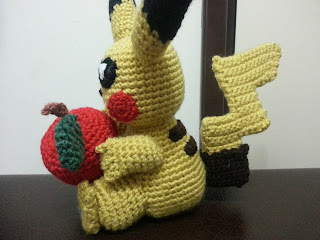 When I saw pikachu, I couldn't just make a normal pikachu that you can get anywhere. I wanted to make a sitting pikachu that has the potential to give either you or his favourite little apple a cuddle! This was the first prototype. I'm going to be making another one soon with slightly smaller white circles for the eyes as I think that will make him look much much more adorable! And I actually managed to find a slightly easier way to add in all of his little fingers and toes!